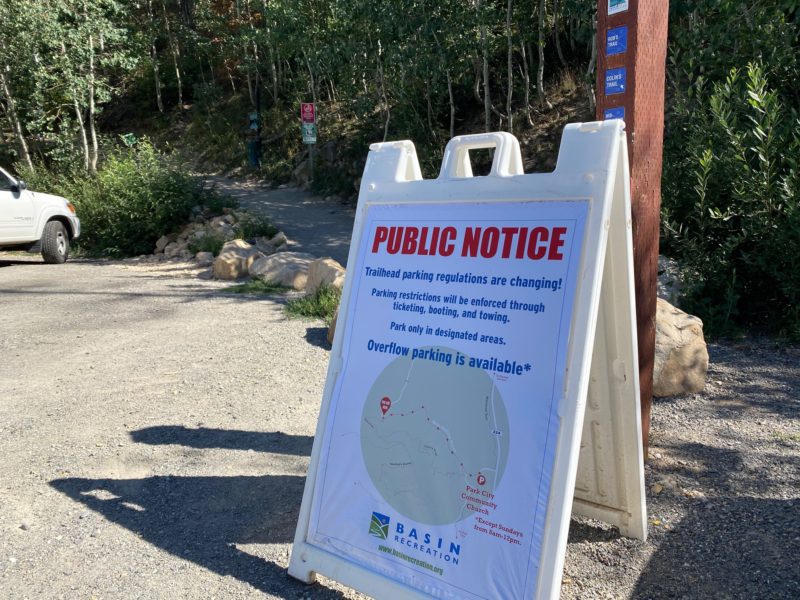 Maybe it’s because the pandemic has shut down nearly all forms of indoor recreation. Maybe it’s because the Salt Lake Valley is at its hottest this time of year. Maybe it’s because hiking, mountain biking and running on trails is fun, and those activities are becoming increasingly popular. Whatever the reason, trailheads in Park City have been extremely popular this summer, and overflow parking has spilled into residential areas. Once again, the natives are getting restless, and county officials are pledging to do something about it.

Summit County had deemed it necessary to ramp up enforcement of parking restrictions at busy trailheads after increased signage and attempts at education have failed to curtail problems ranging from serious—illegal parking blocking emergency access routes—to less severe—neighbors complaining about mountain bikers tailgating in neighborhoods. Enforcement, which will progress from education to ticketing and towing, is scheduled to begin on July 29 after the necessary code changes were implemented.

The trailheads where overcrowding has been acutely felt are in Summit Park at the top of Parley’s Canyon and at Rob’s Trailhead near the Utah Olympic Park. These trailheads are popular with multiple user groups, and they’re easily accessible for people coming up from Salt Lake for some quick recreation after work. Many observers, as noted by a litany of editorials in local media, have pointed to trail users who live outside of Summit County as the primary culprits, and even some county officials have echoed that sentiment. One proposed solution that seems to be gaining traction is for out of county trail users—who do not pay for trail construction and maintenance through property taxes—to pay an access fee, such as for a parking permit.

To quote Jon Snow, “It’s a bad plan.” The trail system in Park City has become the centerpiece of the area’s economy during non-skiing months. Exact figures are disputed, but out-ot-town trail users bring a lot of revenue to local restaurants, shops and bars in Old Town, in Snyderville Basin and throughout the County. Local business alone never before has and is a long way from being able to sustain the economy up here. Trails are what attract people to the area. Adding an obstacle to access isn’t going to fix the problem, but it will create others.

Chaotic trailhead parking is far from a new topic, as evinced by this article in the Park Record from MORE THAN EIGHT YEARS AGO bemoaning the very same issues. Color me shocked it hasn’t been resolved and Park City residents are bemoaning the inconvenience while resisting any infrastructure that could help alleviate the problem. I’ve lived in Park City for over a decade, which makes me either a rotten local curmudgeon or an insurgent new arrival depending on who you ask. Whichever you’d like to peg me as is fine, but I’ve been around long enough to see locals engage in NIMBYism when convenient and decry it at other times.

I also happen to live in one of the “afflicted” areas in Summit Park. There are real problems; certainly blocked emergency access isn’t good. But as far as revelry near the trailheads are concerned, I consider that a collateral issue that comes with the privilege of living within shouting distance from a desirable trailhead. Sorry. Things are even trickier during a pandemic. Everyone is driving solo to the trailheads, and public transit use is way down. That’s going to be an issue for a while longer, but it won’t last forever. I hope.

Increased enforcement is inevitable and probably a good thing, but elitist attitudes and access fees to use public land that are the primary draw to a resort town aren’t going to solve anything. It’s no different than us Summit County residents driving over to ski powder in the Cottonwood Canyons. We can’t have it both ways, so let’s all take a deep breath.

Tony Gillhttps://www.saltlakemagazine.com/
Tony Gill is the outdoor and Park City editor for Salt Lake Magazine and previously toiled as editor-in-chief of Telemark Skier Magazine. Most of his time ignoring emails is spent aboard an under-geared single-speed on the trails above his home.
Previous article
Liberty Park: The Lady of Liberty
Next article
Ding-dong, Water Witch is back!