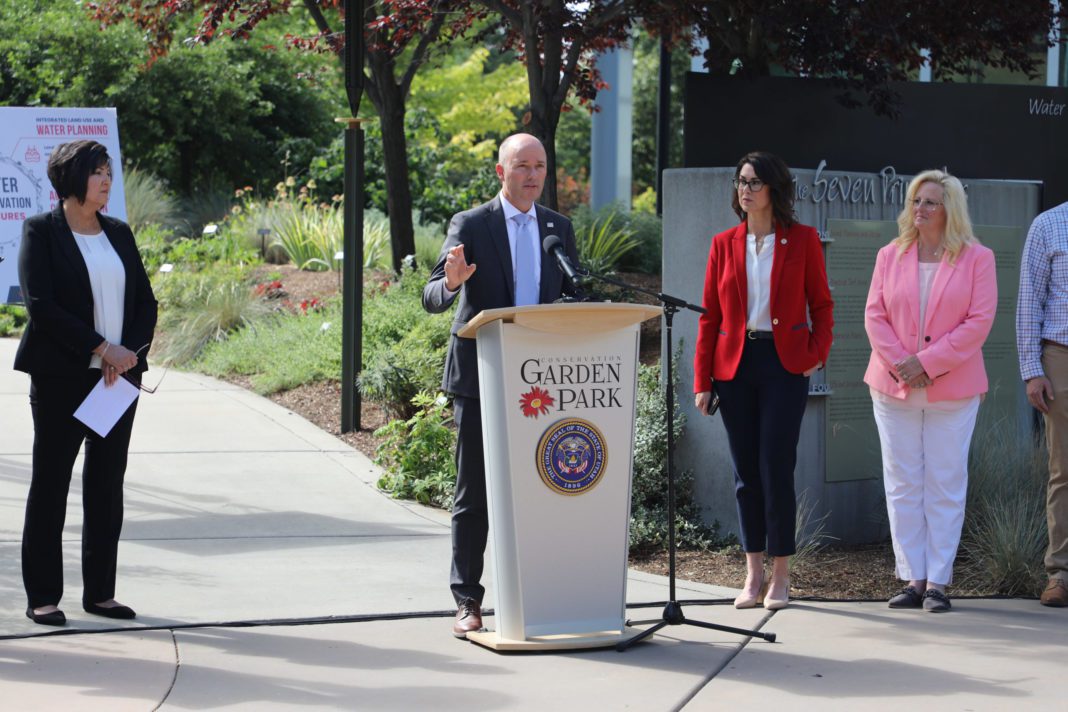 What Are We Doing About the Drought? The Utah Drought Plan

So, what are we doing about the drought, again? As of Thursday, Utah Governor Spencer Cox announced that a state drought plan to tackle water conservation efforts is in the works. The Governor declared the drought an emergency back in March, activating the Drought Response Committee. Other Utah drought response efforts came in the form of subsequent executive orders which addressed the amount of irrigation allowed on state property, putting emphasis on individual responsibility and a call to pray for rain.

We finally did get some rain, but not enough to offer any relief to severe drought conditions. A drought update for the week of July 26 from the Utah Department of Natural Resources stated plainly, “Drought continues to have a stranglehold on the state despite wild weather swings that dumped rain in some areas. The U.S. Drought Monitor categorizes 100% of the state as ‘extreme’ or ‘exceptional’ drought.”

Salt Lake reported in our July/August issue that there did not appear to be a coordinated, unified drought plan in place for the state. Water conservation efforts were largely piecemeal and mostly voluntary. Now we have a clearer picture of what this Utah drought plan could entail, and here’s what we know:

According to the Governor’s office, areas that have installed secondary meters include Spanish Fork, Saratoga Springs and Weber Basin Water Conservancy District, and they have seen a reduction in water use by about 20-30%.

On the land use and water planning front, state leaders say they are enlisting the help of local officials to adopt water efficiency standards for all new developments.

Meanwhile, the agriculture industry remains the largest water user in the state, and the Governor’s Office says the state has invested about $7.3 million in agricultural optimization for research and projects, improvements in agricultural water use practices, creating benefits for farmers, optimizing water use and protecting water quantity and quality—largely through an ongoing grant program created by the state legislature back in 2019.

The soon-to-be statewide turf buyback program would be similar to programs like Jordan Valley’s “Flip Your Strip” program to help incentivize people to replace grass lawns with waterwise landscaping options.

According to the Governor’s office, a turf buyback program is scheduled to be made available to Layton City residents within the week, and several other municipalities are working towards them as well, including one in Washington County.

Many of the current efforts still seem to be piecemeal, but water districts and municipalities are implementing their own plans as Utah’s water agencies are in the process of developing a comprehensive state water plan.

Christie Porterhttps://christieporter.com/
Christie Porter is the managing editor of Salt Lake Magazine. She has worked as a journalist for nearly a decade, writing about everything under the sun, but she really loves writing about nerdy things and the weird stuff. She recently published her first comic book short this year.
Previous article
Utah Restaurant Workers: It’s a Wage Shortage, Not a Labor Shortage
Next article
Jason Isbell and the 400 Unit Kick Off Red Butte Concert Series