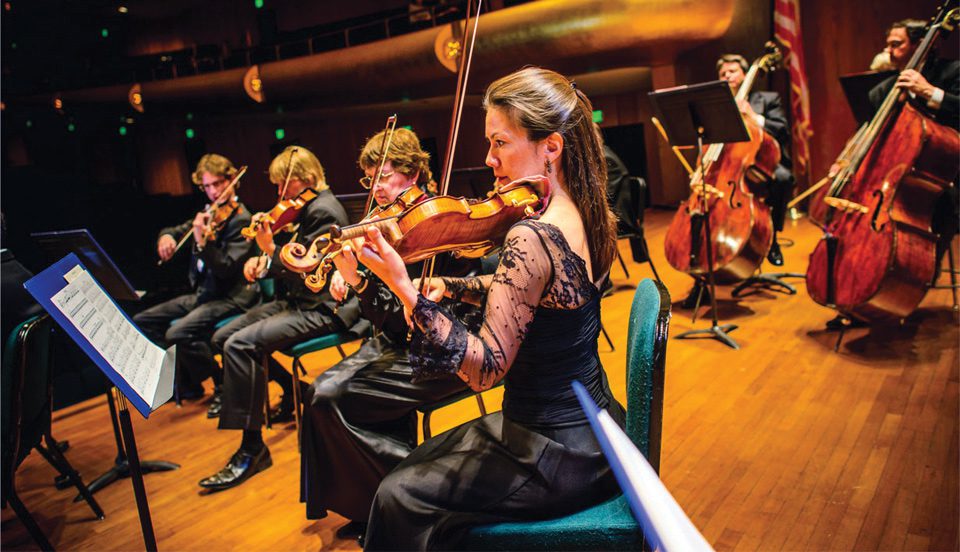 A mythic sea captain, a flock of French-soldiers-turned-helicopter-parents and a turtlenecked tech icon—this season of Utah Opera travels through continents and centuries with four diverse performances. The season opens with The Flying Dutchman, written by legendary German composer Richard Wagner and starring Metropolitan Opera performers Michael Chioldi and Wendy Bryn Harmer. Next, Gaetano Donizetti’s 1840 comedy The Daughter of the Regiment follows Marie (Madison Leonard), an orphan raised by a regiment of soldiers, who falls into a star-crossed romance with Tonio (Jack Swanson), an enemy prisoner. Giuseppe Verdi’s classic masterpiece Rigoletto, the tragic story of a court jester whose daughter falls in love with a cruel Duke, will star Scott Hendricks in the title role alongside Jasmine Habersham and Matthew White. Closing out the season is The (R)evolution of Steve Jobs, a contemporary American opera by composer Mason Bates and Pulitzer Prize-winning librettist Mark Campbell. Starring John Moore as Jobs, this unique new work combines electronic instrumentation with traditional opera music to tell the origin story of the influential Apple co-founder.

(P.S. If you can’t wait until October to get your opera fix, tickets are on sale for Gilbert & Sullivan’s beloved comic opera The Pirates of Penzance, which will close the 2021-22 season from May 7-15.)

Utah Symphony’s 2022-23 season will be a bittersweet celebration of longtime conductor Thierry Fischer, who is leaving in 2023. The Masterworks series, where the Symphony invites world-class soloists to perform a repertoire of classical music, anchors the 2022-23 season. The Symphony is pulling out all of the stops this year with some of the most beloved compositions of all-time, including Beethoven’s Symphony No. 5, Tchaikovsky’s Piano Concerto No. 1 and Mozart’s Magic Flute Fantasy. Fischer will say farewell to Utah Symphony in May 2023 with a performance of Mahler’s showstopping Symphony No. 3 featuring The Tabernacle Choir at Temple Square and The Madeleine Choir School.

Utah Symphony also offers other series subscriptions for different tastes, whether you’re a Broadway fan, movie buff, or classical music obsessive. Utah Symphony opens the rehearsal doors for select Masterworks performances in the Finishing Touches Rehearsal series, allowing audiences to see the process of refining onstage performances. In the Entertainment series, the worlds of pop and Broadway meet the Symphony for unique performances. This year, headliners include musical theater legend Bernadette Peters and rock-meets-cabaret performer Storm Large. Iconic movie music comes to life in the Films in Concert series, where the Symphony performs Hollywood film scores alongside screenings of favorite movies. The 2022-23 lineup includes The Goonies, An American in Paris and Star Wars: The Force Awakens. In the Family series, kid-friendly performances—like a Santa-starring sing-along, a Sherlock Holmes mystery and a street dance troupe that break dances to classical music—introduce little ones to the Symphony. Utah Symphony will also bring select performances to Utah County at Utah Valley University’s The Noorda.

Single tickets are still available for performances through August in the 2021-22 season. Utah Symphony will also return to the mountains this summer for the Deer Valley Music Festival. The lineup features tributes to Disney and Aretha Franklin and will welcome guests including Boyz II Men and Kristin Chenoweth.

Sherlock Holmes and the Case of the Missing Maestro: April 23, 2022

Philharmonia Fantastique: The Making of the Orchestra: April 15, 2023

Utah Symphony at The Noorda

Sherlock Holmes and the Case of the Missing Maestro: April 19, 2022

Philharmonia Fantastique: The Making of the Orchestra: April 11, 2023

Josh Petersenhttps://www.saltlakemagazine.com/
Josh Petersen is the former Digital Editor of Salt Lake magazine, where he covered local art, food, culture and, most importantly, the Real Housewives of Salt Lake City. He previously worked at Utah Style & Design and is a graduate of the University of Utah.
Previous article
A Single Mormon Takes Center Stage in Plan-B Theatre’s ‘Aftershock’
Next article
Small Lake City Reprise: The Hollering Pines