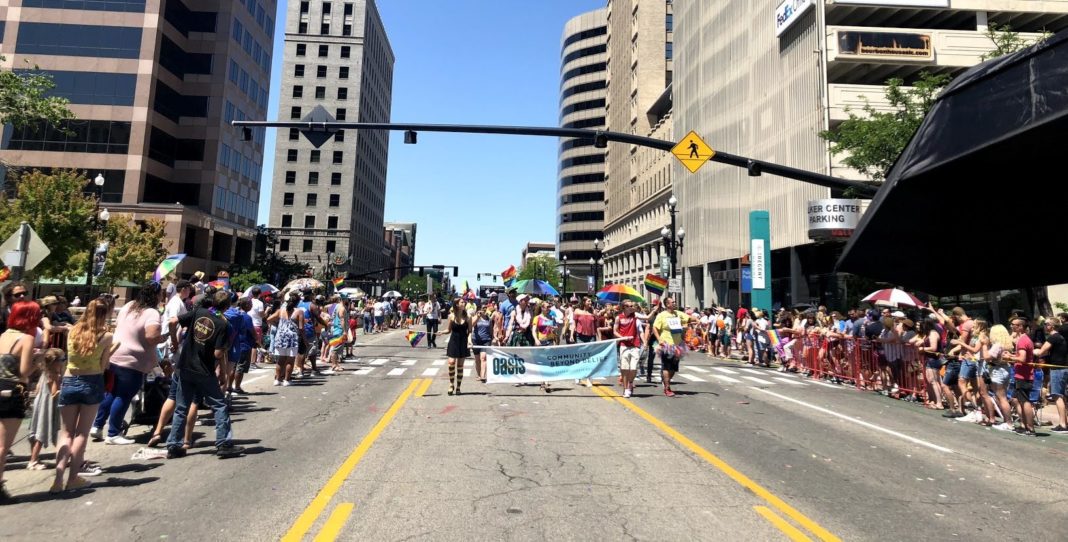 Thousands of vehicles will drag Main Street in Salt Lake City on Sunday to celebrate the LGBTQ+ community and National Coming Out Day. The Utah Pride Center is organizing the Utah Pride Road Rally and expects an even bigger turnout than they had in 2020, the inaugural year for the event, which proved a successful solution to celebrating amidst pandemic restrictions.

“I can’t think of a better way to celebrate National Coming Out Day than for all of us to decorate our vehicles and come together in this way,” says the Utah Pride Center CEO Stacey Jackson-Roberts. “It gives everyone an opportunity to be true participants in a cause, rather than simply spectators. Given everything the LGBTQ+ community has been through this past year, this is a chance to show the broader community that we’re here, we belong and we have pride.”

National Coming Out Day began in 1988 on the one-year anniversary of the second National March on Washington for Lesbian and Gay Rights. That march, which attracted hundreds of thousands of attendees, demanded funding for medical research and an end to discrimination against gay people. National Coming Out Day was founded by psychologist Richard Eichberg and activist Jean O’Leary as the AIDS Epidemic raged in the U.S., encouraging queer people to publicly declare their sexual orientation and fight for gay rights.

Come Sunday morning at 11 a.m., participants will arrive at one of the nine rendezvous locations across the Wasatch Front, where they’ll decorate their vehicles for the big drag. At noon, the rally kicks off with pace cars for everyone to follow that will stagger their arrival on Main Street.

Jackson-Roberts says National Coming Out Day provides an important opportunity for members of the LGBTQ community to come out and be seen and validated as their authentic selves. The Pride Road Rally will also bring in funding for services provided by the Utah Pride Center–including mental health and wellness services, education and training and suicide prevention resources. “By registering vehicles and raising money, we’re shooting for $150,000,” says Jackson-Roberts. “This will help people who are pushed to the margins of our society, which values heterosexual and cis-gender experiences over LGBT life experiences.”

During the pandemic, the Utah Pride Center had to suspend or shift many of its in-person services to online. But, come January, Jackson-Roberts says that should change. “Our staff has been diligently working very hard to make sure we are providing the services virtually, and our behavioral health department has started seeing some people in-person, but it’s not fully in place yet. We hope to put policies and practices in place to be able to open in January with a full slate of in-person services.”

Jackson-Roberts, who took the position as Utah Pride Center CEO just this past September, is also planning a listening tour for later this year. “We want to find out how we can best serve LGBT individuals in smaller, rural communities throughout the state of Utah.”

Christie Porterhttps://christieporter.com/
Christie Porter is the managing editor of Salt Lake Magazine. She has worked as a journalist for nearly a decade, writing about everything under the sun, but she really loves writing about nerdy things and the weird stuff. She recently published her first comic book short this year.
Previous article
Bears Ears and Grand Staircase Monument Protections Restored, For Now
Next article
Immersive Van Gogh Exhibit Moves Salt Lake Audiences