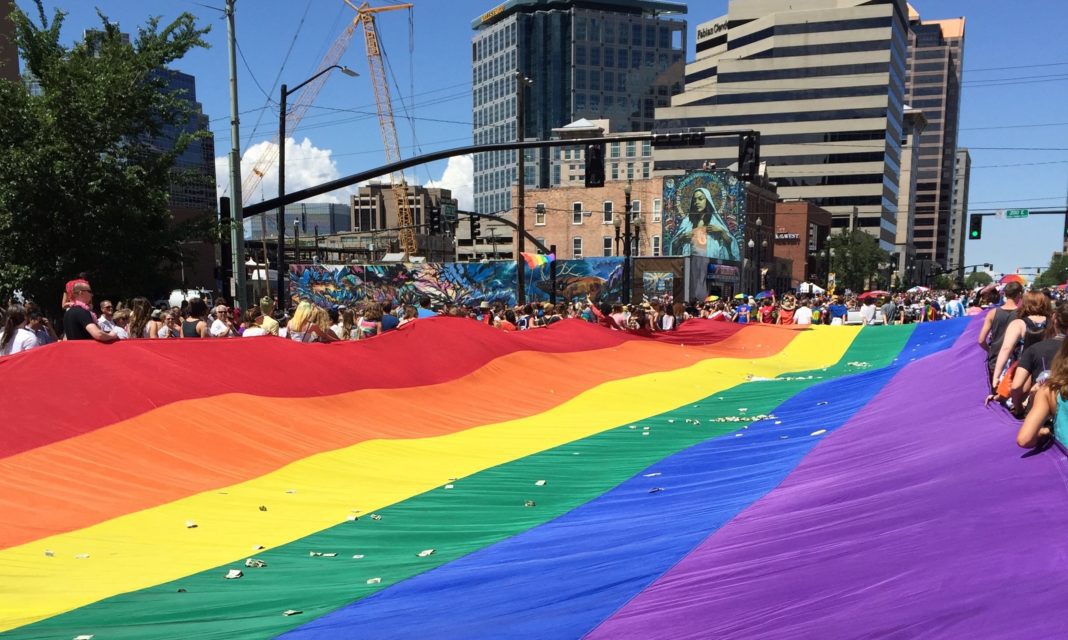 Your Guide to Pride Week

The Utah Pride Center’s Pride Week (June 1-7) is here. We’ve never had a Pride like this before and probably never will again. While we’ll miss the raucous celebration of summer loving that takes over downtown with its parade and festival, this year’s events provide an opportunity to reflect on and explore LGBTQ+ stories and identity.

The Story Garden, a maze-like art experience at Washington Square, is wholly unique to this year’s Pride. Artist Caitlyn Barhorst is making one of the sculpture’s for the Story Garden. The statue is of a butterfly, about four or five feet wide, made of reclaimed wood, with a bench at its base. “Someone can sit on the bench in front of it to take a picture with the wings behind them,” says Barhorst.

Butterflies have long had symbolic meaning for those who have come out as LGBTQ+, and Barhorst hopes their choice of materials helps translate that meaning. “This lumber that was otherwise at the end of its life has found a new function in a sculptural piece,” they say. Reclaimed wood features heavily in Barhorst’s other work as well, influenced by their master’s degree in historic preservation. “I just relate to it a lot better—of having that sort of story. The pieces have this history. You might not actually know where these things have been and what might have happened in their life.”

It doesn’t hurt that recycling materials is also a little more eco-friendly.

For Barhorst, an introvert, the Story Garden offers an opportunity to participate in Pride in a way that is more their speed than a big parade might be. “I think making this garden piece is more along my personal interest in what I enjoy doing,” they say. And, with a Pride Week unlike any other, more people are finding new ways to take part. “It’s an opportunity to have community, connection and understanding. It’s a time to be a part of the places we live and share stories with people who might not live it day to day,” says Barhorst.

The Story Garden will provide the opportunity to tell those stories in a new way. “I’m excited to see what it is going to be like,” says Barhorst. “I think it will bring a calming kind of joy. Sculptural gardens are intended to be a reflective type experience.”

Barhorst’s work is on Instagram @alabasterandstone, and they have a pop up event at the Madewell in City Creek on June 15. You can also see them at Craft Lake City in August.

In a year with an onslaught of legislation targeting LGBTQ+ people, particularly transgender members of the community, Pride is returning to its protest roots this year. The Rainbow March and Rally will be one of the focal points of Pride Week. The rally will begin at the Utah State Capitol on Sunday, June 6 at 10 a.m. The march will take place after the rally, carrying the 200-foot rainbow flag down State Street through rainbow colored balloon arches, which will join together to create a massive balloon arch with over 1000 balloons. The march will take a turn heading East on 9th Street and end at Liberty Park.

A staple from previous years as well, the Pride Interfaith Service is a virtual event where many faiths and traditions come together to celebrate and unite for a service of song, prayer and inspiration. It starts at 7 a.m. on June 2, with special guest speaker Angie Rice. You’ll need to register to receive access to the Zoom event.

There won’t be any food vendors at this year’s Pride events, so, instead, brunch or lunch at one of restaurants supporting Pride this year by offering discounts to Story Garden attendees. While downtown, you can check out Handle Salt Lake or Green Pig Pub for a meal and get dessert at Doki Doki. Or, skip down to the lower 9th neighborhood for lunch at Laziz Kitchen or Proper Burger.

If you don’t want the party to stop, keep it going with a beer or cocktail and dancing at one of Salt Lake City’s gay bars. Starting the weekend of June 6, Sun Trapp is holding a Wet & Wild Party every Friday and Saturday. Club Try-Angles has Pride-centered events happening all week.

Maybe a drag show is more your thing. If so, you can usually catch your fill of fabulous at venues like The Urban Lounge, which is hosting a Pride Party on June 3, or Metro Music Hall, with its parade of drag shows. The Loading Dock is also hosting a Pride Kick-Off party on June 3, so partying all night is definitely still an option, whether there is a festival this year or not.

Tickets for the Story Garden can be purchased online at utahpridecenter.org along with more information on official Pride Week events.

Christie Porterhttps://christieporter.com/
Christie Porter is the managing editor of Salt Lake Magazine. She has worked as a journalist for nearly a decade, writing about everything under the sun, but she really loves writing about nerdy things and the weird stuff. She recently published her first comic book short this year.
Previous article
Silly Market Is Back
Next article
Take It Outside to Become the Next Grill Master