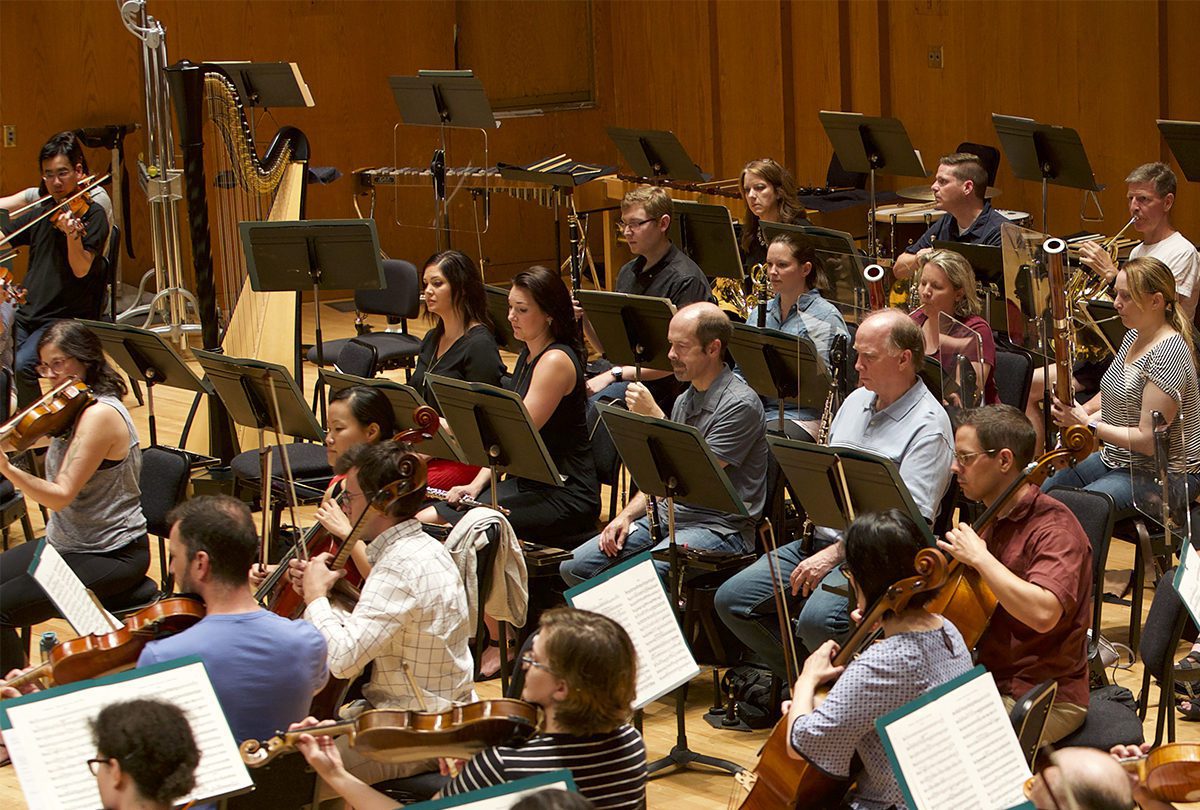 SLmagazine sent me to the Utah Symphony with what we figured was a crazy idea. We asked if I could sit on stage during a performance. Turns out that this was, in fact, a crazy idea. People spend their whole lives to get on that stage, after all, and I just show up with a tuba? Bang on the tympani a bit? However, the symphony’s publicist, Renée Huang, suggested that perhaps a rehearsal might be arranged.

Last spring, I attended the symphony for the fist time. My date for the evening was Becca, my 13-year old. We attended UNWOUND, the Utah Symphony’s modern-day attempt to make going to the symphony less serious and more approachable. When the audience lights dimmed and as Rachmaninoff’s “Piano Concerto No. 2”  was being played, my emotions got the best of me. Not prepared for kleenex, the tears just fell. For the first time in a long time, was caught completely caught off guard, holding my little girl’s hand, enjoying and listening to real humans playing instruments.

And thus, I entered Abravanel Hall, carrying nothing but my notepad and a pen (no tubas allowed) for the symphony’s rehearsal in advance of the Deer Valley performance on August 2, 2019. I entered in through the back entrance and was led onto the stage, a chair was waiting for me, right next to Second Bassoon Jennifer Rhodes.

“Hey, you may want one of these,” said one of the horn players behind me as he pointed to the plastic acoustic shield many of the members of the orchestra use and added, “It can get a little loud.” I showed them my set of earplugs but he assured me that I’d need additional measures to protect my ears while they were performing. This was after all to be a rehearsal for Tchaikovsky’s “1812 Overture” you know, the one with the cannons.

As Principal Conductor Conner Covington joined us on stage, the orchestra tuned up and welcomed guest Ukrainian pianist Anna Fedorova, who was there to rehearse Tchaikovsky’s Piano Concerto No. 1. Wearing jeans and her hair pulled back in a pony-tail, the casual look stood in contrast to the the immensity of sound and proficiency while playing—it’s astounding.

The symphony also rehearsed an American classic, Aaron Copland’s “Appalachian Spring”. While I seem to always pay attention more to the strings, I was right in among the woodwinds. I started paying attention to the prelude and conclusion with the woodwinds out in front of the melody. Without the oboe, the bassoon, the clarinet and the flute there is no “Appalachian Spring.”

I played in the orchestra when I was in middle school but this experience was a far cry from my 1st-period orchestra class. Without a cello (or a tuba) in hand, I watched as musicians would stop to meticulously adjust their chairs or obsessively clear out the spit in their instruments. Did you know that when not in their mouths, a woodwind’s reeds are kept moist during breaks by dunking them in a cup of water? I didn’t. Basically, it looks like musicians at this level are seriously having fun, in a very serious way. I kept watching all the non-verbal signals that would travel around the stage, a grimace from Covington after a misstep, a smile for the strings hitting their cue, rolled eyes above a clarinet at missed notes, nods and head shakes, winks and foot taps all added up to a complicated camaraderie among the musicians and between them all and the conductor.

With all this activity around me, it was still impossible to miss the commanding presence of the conductor. That’s sort of the point right? And while Covington makes it look effortless; it’s everything but. His brain is going in about 100 directions at once. Keeping precise tempo, thinking forward to the next line and who next needs to be prompted at exactly the right moment and to what degree.

Like a time-traveler, he’s also listening to the collected instruments as one giant, well, SUPER INSTRUMENT. As Covington explains, “Downplaying themselves, our musicians see themselves as one unit, which is one of the goals or intentions of a symphony orchestra.”

Covington added another element that I didn’t think of, and that is during all of it, he is making mental notes on what needs to be addressed or adjusted and will bring to the attention to the musicians later. While in his second season, in our interview, I asked Conner what he hopes to bring to our community in the future?

“The material we perform now is the best we have ever created. The Utah Symphony has a tremendous opportunity to create authentic human connections in an age inundated with electronics and social media.”

Don’t think stuffy, and don’t just think Beethoven’s “No. 5 in C minor”—Da-Da-Da-DAAAAAA. Admittedly I’m a sucker for the classics. Instead, scroll through some of these upcoming Utah Symphony events and kick back against your current entertainment comfort zones.

Jen’s symphony experience will be part of a larger story in our upcoming November/December issue celebrating the 80th anniversary of the Utah Symphony.

Read all of our A&E postings, right here.