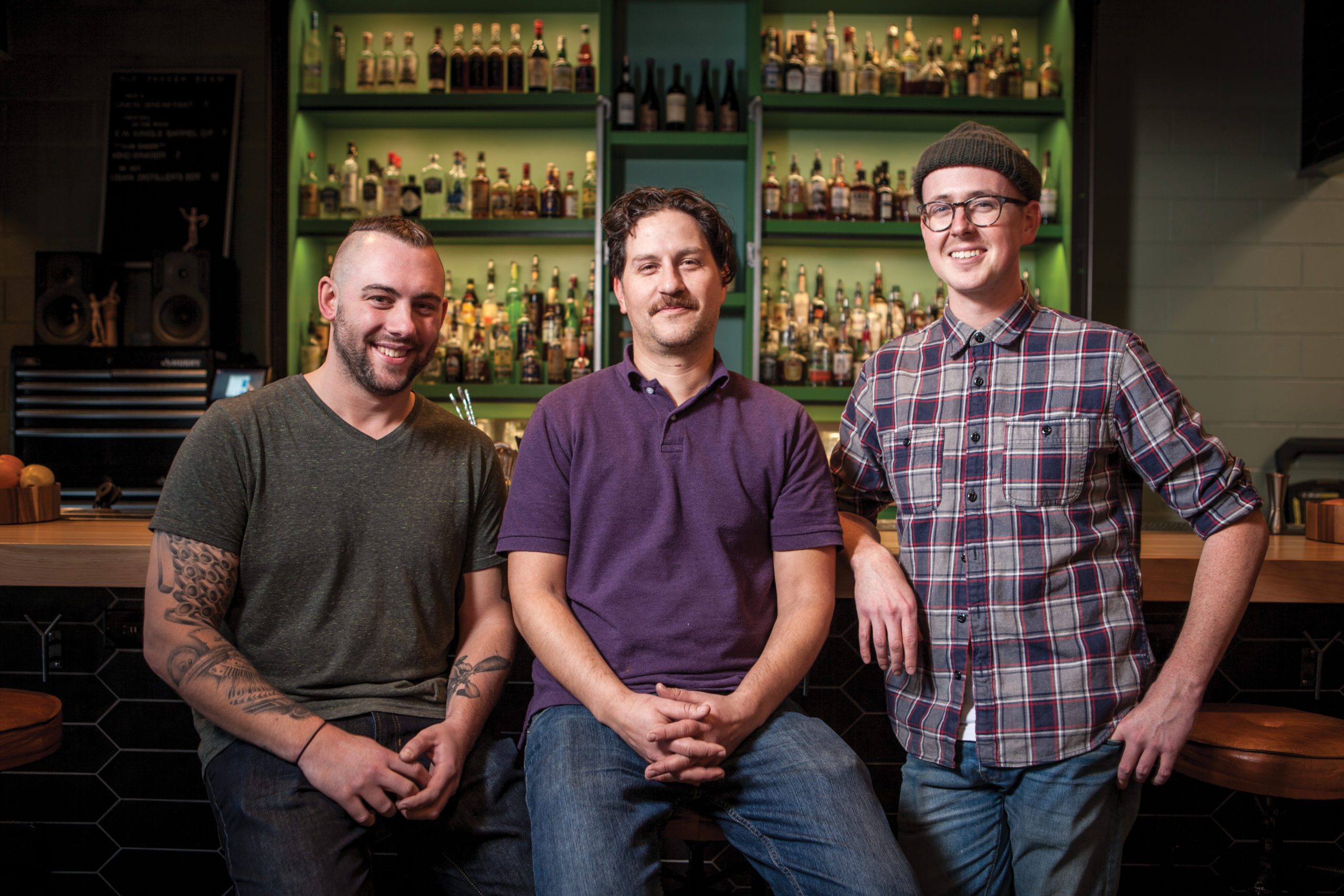 Water Witch: This is why people go to bars.

Good things come in threes, they say. OK, they say that about bad things. But what do “they” know anyway?

Here’s what I know:  SLC mixmasters Scott Gardner, Sean Neves and Matthew Pfohl are three of the best things to happen to Utah cocktails in a generation. We’ve been waiting (and waiting) thirstily for them to open their own bar. And now they have.

The guys have been working together for a couple of years as hired-gun bartenders while they plotted their grand project.

Pfohl says, “It’s fun what happens when you pop a bottle of bourbon. You come out with a company!”

But, as Gardner says, “By the time we were ready to open, everyone was already sick of the bar we didn’t open. So we changed the name to Water Witch.”

These guys crack each other up.

But why Water Witch?

Neves says the name has several meanings: “Water Witch was one of the original yachts from the Salt Lake yacht club in the 1860s.” Hence the mural on one wall of the tiny bar in 9th Avenue Market.

“Plus, it sounds like a heavy metal band,” Gardner says.

But they all agree the name is highly symbolic, referring to the old belief that with the right stick and a divine connection, you could find water even if you couldn’t see it. So Water Witch is a watering hole in the desert.

You might think there are plenty of bars in Salt Lake City. But Water Witch proves you wrong. For one thing, the goal of this gang of three has been different from the start. Yes, they want a place with delicious drinks and delicious food, but mainly, “we want it to feel different,” says Neves. “We want it to be a place for the neighborhood to hang out.”

“We don’t want to be just a cocktail bar, although that’s what we’re known for. We want you to come in and have a snack and a pitcher, if that’s your deal.  I mean, we have Miller Lite on tap. We have Red Bull.”

“We want this to be a comfortable community bar,” says Pfohl. “A bar is more than a drink. It’s a place to be with friends, meet new people, drown your sorrows.”

Check out this video to see how Scott Gardner made the fiery Mai Tai.

Mary Brown Maloufhttps://www.saltlakemagazine.com/
Mary Brown Malouf is the late Executive Editor of Salt Lake magazine and Utah's expert on local food and dining. She still does not, however, know how to make a decent cup of coffee.
Previous article
Code Pink: Park City's Crisis of Teen Overdoses
Next article
A Seat at the Bar with Water Witch SLC