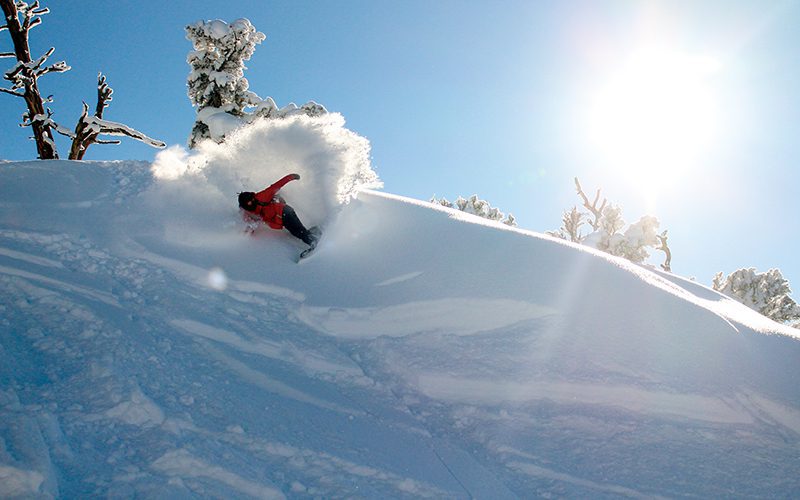 The Air Up There – Skiing Northern Utah

Squinting through bleary eyes I feel like I’ve engaged the hyperdrive in the Millennium Falcon. The headlights give the falling snow a disorienting luminescence, but the way the flakes are piling up on the pavement makes me think the white-knuckle journey will be worth it. The license plate on my truck says, “Greatest Snow on Earth,” but every now and again a string of splitter storms leaves the central Wasatch high and dry. Some folks cut bait to warm themselves like lizards on desert rocks, but I’m in search of snow. I’m also looking for an escape from the homogenized commercialization permeating skiing. I’m after deep snow and warm yurts in remote mountains. I want cheap lift tickets with an old-school vibe and a watering hole that wears its carpet stains with pride. I’m heading north.

The drive up I-15 from Salt Lake City takes less an hour and a half. You wind up in Paradise. That’s not hyperbolic. The town is actually named Paradise, and the snow and terrain at Whisper Ridge will leave you feeling like you’ve found the promised land. Whisper Ridge is billed as a backcountry resort, offering cat skiing, heli skiing, snowmobile tours and backcountry yurts. I’ve long stumped for cat skiing over its airborne cousin since it’s more “affordable” and less vulnerable to adverse weather—the very kind that leads to great conditions—than heli skiing.

Starting at around $550 per person, a day of cat skiing at Whisper Ridge isn’t exactly cheap, but you get to ski up to 12,000 vertical feet of untracked powder. Lift ticket prices at many resorts are soaring well into triple digits, so an unforgettable day of skiing without slogging through lift lines and chaotic parking lots sounds like a pretty good value proposition. 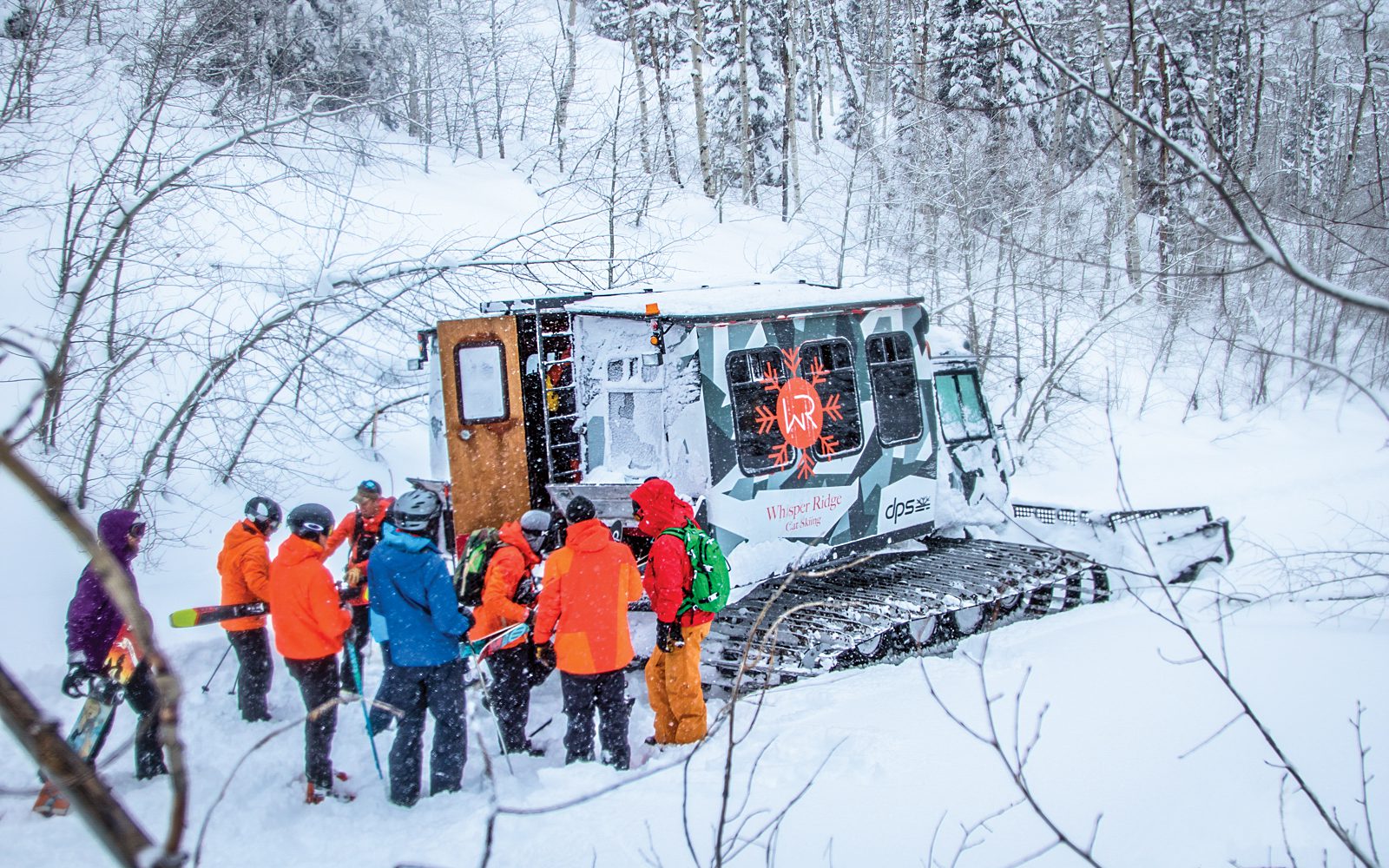 Cats hold up to 14 people, so you can fill one out for an epic day with your crew if you have that many friends—I don’t—alternatively, enjoy meeting new people while shredding deep powder all day long. The guides at Whisper Ridge have the knowhow to keep groups safe in avalanche terrain while tracking down the best powder in the state. 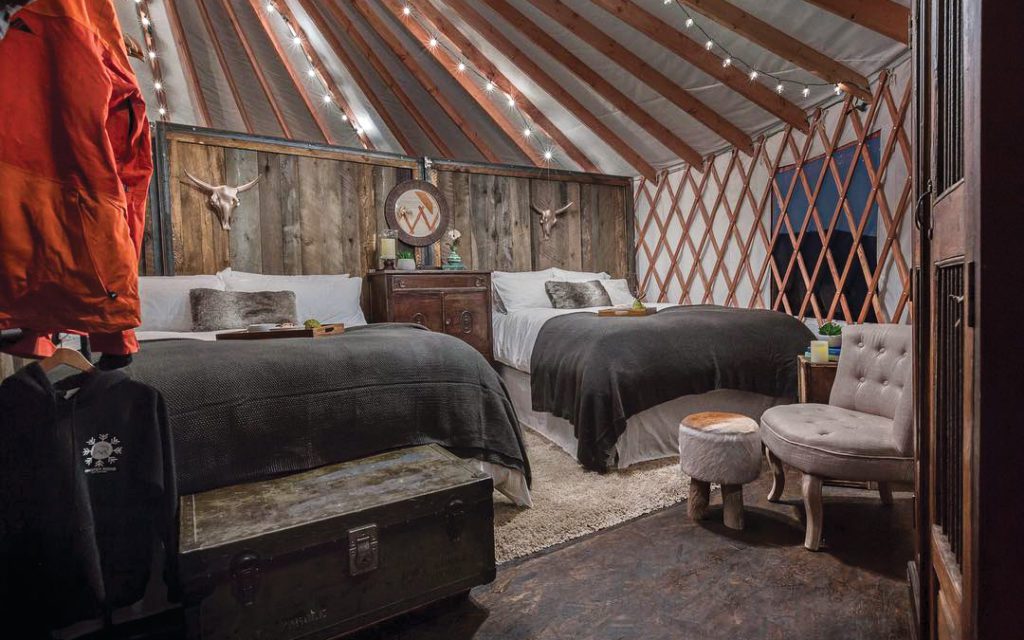 While in Paradise it’s best to lean-in and fully embrace indulgence. Whisper Ridge’s yurts take luxury glamping to the next level. The Perch Yurt Village is atop a backcountry mountain ridge with 360-degree views of the Wasatch as well as an outdoor hot tub and a recreation yurt with ping pong and billiards. Don’t forget a dinner prepared by a five-star chef to refuel after a day of ripping powder. Ski and lodging packages start at $930.

After emptying the 401k for a day of cat skiing, it’s time to climb the latitudes for a more frugal adventure in Idaho. The miles tick by quickly on the hour and 45 minute drive North on I-15 from Paradise. Columnar basalt formations dot the landscape as you approach the Portneuf Range and your ultimate destination: Pebble Creek Ski Area. Pebble Creek—known locally as The Rock for its steep and rocky nature—is a little-known stone in the crown of the Gem State that’s been in operation for 69 years and counting. The understated base area sits in the shadow of Bonneville Peak and its 2,200 lift-accessed vertical feet is more than 50 percent advanced and expert skiing. A Saturday or Sunday lift ticket can be had for $47, and it’s only $30 during for a midweek pass. You could take a family of four skiing here for about the price as a single ticket at one of Utah’s corporate mega-resorts.

Each of Pebble Creek’s three chairs is a fixed-grip triple, so you’ll have to embrace the slower pace of the day. Your legs will probably be thankful for the extra rest as the laps start to pile up on The Rock and Rattlesnake off the Skyline Lift. The resort backs up to the Caribou National Forest, which offers endless backcountry skiing opportunities for the knowledgable and incredible views for everyone else.

You will miss out on a couple things skiing at Pebble Creek. Mostly lift lines and overpriced food and drinks. A beer at the Rock Bottom Saloon is $2, and the popcorn’s free. Local bands liven up the apres scene on Sunday nights and move to the outdoor deck when things warm up in the spring. There’s not much else going on Inkom, so make your way over to Pocatello for the evening. Try Jim Dandy Brewing for a beer and a bite with a rotating cast of craft brews and popular food trucks.

See all of our outdoors coverage here.

Tony Gillhttps://www.saltlakemagazine.com/
Tony Gill is the outdoor and Park City editor for Salt Lake Magazine and previously toiled as editor-in-chief of Telemark Skier Magazine. Most of his time ignoring emails is spent aboard an under-geared single-speed on the trails above his home.
Previous article
Hotel Bars – Tourists, Travelers and Townies
Next article
10 Best Watering Holes at Sundance