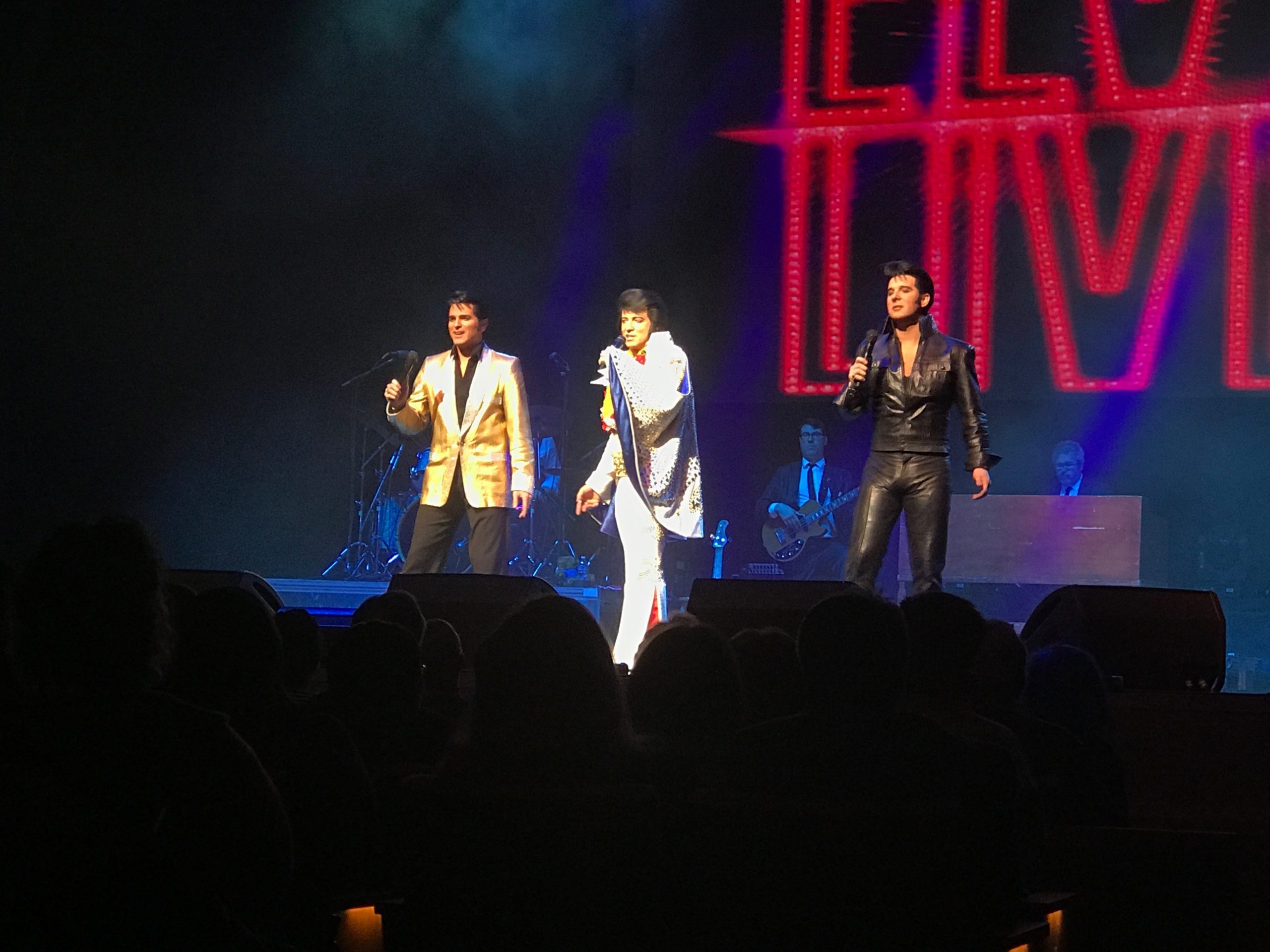 When I mention the crowd in any review, it’s only to serve as a gauge of the feel at the show. That is more true than ever for Elvis Lives, which played at the Eccles Theater last night.

For this review, I actually want to start with the crowd. Walking in, the crowd was a marvel. It skewed old, of course, but there were people of all ages. There were elderly women wearing airbrushed shirts with the image of The King of Rock & Roll on them. There were rockabilly kids. There was even one woman wearing a bedazzled jumpsuit and fake sideburns.

I knew when I walked in that this was a group of over 2,000 people who paid to see men they knew were not Elvis, mimicking the iconic singer. I wondered what possessed someone to do that.

Elvis Lives bills itself as a Graceland-approved “Tribute show.” It’s really a traveling Vegas-style impersonator show. It’s got strobe lights, fog, a live band and three Elvis’—Young Elvis, Movie-era Elvis and, what the show calls “Concert Elvis,” but the rest of us call “Fat Elvis.”

This is a good time for me to disclose that I am actually an unapologetic an Elvis fan. I was born after his death, but own bootleg recordings, I’ve seen every one of his movies and I once had a very emotional experience at Graceland. I am not an Elvis hater, by any definition.

The show (after a brief false start due to technical difficulties) began with archived video footage of The King with audio narration by the real Elvis talking about his start in music. Then the first Elvis of the night took the stage. This was young Elvis— jet black hair in a pompadour and cheekbones just like the real guy’s—of the three Elvis’ that took the stage, he looked the most like the real thing and he certainly moved like him.

This is when things got interesting. If your grandmother went to see not-really-Elvis last night, you should know there are decent odds that she rushed the stage to get a kiss from the guy. She may have even given him a pair of panties (someone did). There was a woman a few rows in front of me who acted like a giddy schoolgirl as she approached the stage to give each performer a teddy bear (get it?) throughout the night.

The second Elvis, movie-era, Elvis, was given the misfortune of covering some of the most lackluster of The King’s years. His act relied more on the talented back-up singer/dancers and even Ann-Margaret impersonator for support. Still, the crowd went wild. More kisses were given.

There was a long intermission(featuring an ad for Graceland and for Vegas impersonator shows) before Young Elvis, clearly recognized by show management and the crowd as the star of the show, came back dressed in leather as ’69 Comeback Special Elvis to have a “jam session” with the talented and hilarious band that had played in support all night. Then our third Elvis took the stage in a white bell bottomed and sequined jumpsuit. There was one problem with this Elvis, who copied the real Elvis’ karate moves to the tee, and that is that he is trimmer than the real deal was. The crowd didn’t seem to mind this svelte “Fat Elvis,” they sat gifts on the stage. He kissed them all.

All of the men looked like and sounded like Elvis, and they played all the Elvis songs you’d expect them to play. The costuming was great and the production value was as high as you’d expect from the same company that brings you Vegas shows. All of that seemed secondary to the singers and their connection to the crowd, really.

I have two guidelines I follow for concert reviews. The first one is: Say what you’d tell your friends about the show, snark and all. The second is: Judge a show by the value for people who bought tickets, not by your own musical tastes.

This brings us back to the crowd. I knew that the three men onstage were not the real Elvis Presley. I’m pretty sure all the women in the house knew that, too. But that didn’t stop them from feeling like teenagers again when he took the stage. When we’re talking about value per dollar—that’s unbeatable.

But seriously, tell your grandma that panty thing was a step too far. Lord have mercy.

Christie Marcyhttps://www.saltlakemagazine.com/
Christie Marcy is a former managing editor at Salt Lake magazine. Though she writes about everything, she has a particular interest in arts and culture in Utah. In the summer months, you will find her at any given outdoor concert on any given night. In the winter, you will find her wishing for summer. Follow her on social media at @whynotboth.
Previous article
Film Review: 'A Cure for Wellness,' not coherence
Next article
Get Schooled: New Book from Local Historian