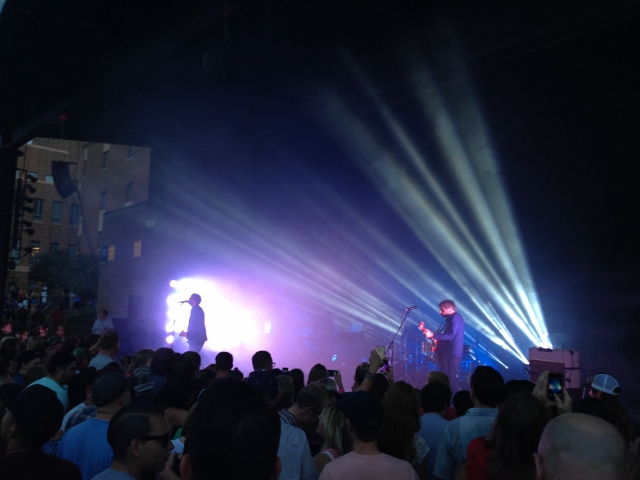 The final installment of June’s Ogden Twilight Concerts was a success. Concertgoers flooded the Ogden Amphitheater to see The National Parks, Jim Adkins of Jimmy Eat World, and headliners Peter Bjorn and John for the closing show. It was a warm summer night that cooled off as the sun set. There were food trucks and drinks from local favorite Wasatch Brewery. In between sets, sponsor Pepsi reps got the crowd to play a giant game of volleyball with oversized beach balls.

Peter Bjorn & John took the stage to deafening cheers from the anxious attendees. The Swedish trio exuded a stage presence only afforded to true European rock stars. Frontman Peter was the wild vocalist/guitarist leaping across the stage and spinning tales about his Swedish homeland. Peter was an awkward dancer (and he danced a lot), but he has killer confidence and his voice is mesmerizing, so all is forgiven. Bjorn was a quiet, brooding supplier of great guitar. John was the drummer who held it all together.

The group knocked out songs with rock, funk and techno sounds and an incredible energy. PB&J closed with an encore of what is perhaps their most well-known song, “Young Folks.”

The Ogden Amphitheater was the perfect setting for a captivating show that was definitely a result of careful planning and a desire for everyone to have a blast.

In a previous interview with Salt Lake Magazine, Jared Allen, owner of Ogden bar Alleged and founder of the Ogden Twilight Concerts, said about the concert lineups: “We didn’t take just anybody. Anyone who attends these concerts will be blown away.”

Allen was absolutely right. This concert had me dancing and singing along and wishing I could listen to just a few more songs at the end of the night. The rocking volume level meant I could only hear out of one ear when the show wrapped, and that was totally worth it.

Allen shared this tidbit on the Ogden Twilight Facebook page after the show: “Well that’s a wrap… Or is it? Be on the look-out for additional Ogden Twilight Presents shows later this summer/fall both on the roof at Alleged and at The Ogden Amphitheater. I would put August 12th, August 13th, and September 16th on your calendars… I can’t wait to share these artists. There may be another show or two in September as well.”

If these upcoming Ogden Twilight shows are anything like the concerts this June, you won’t want to miss them.