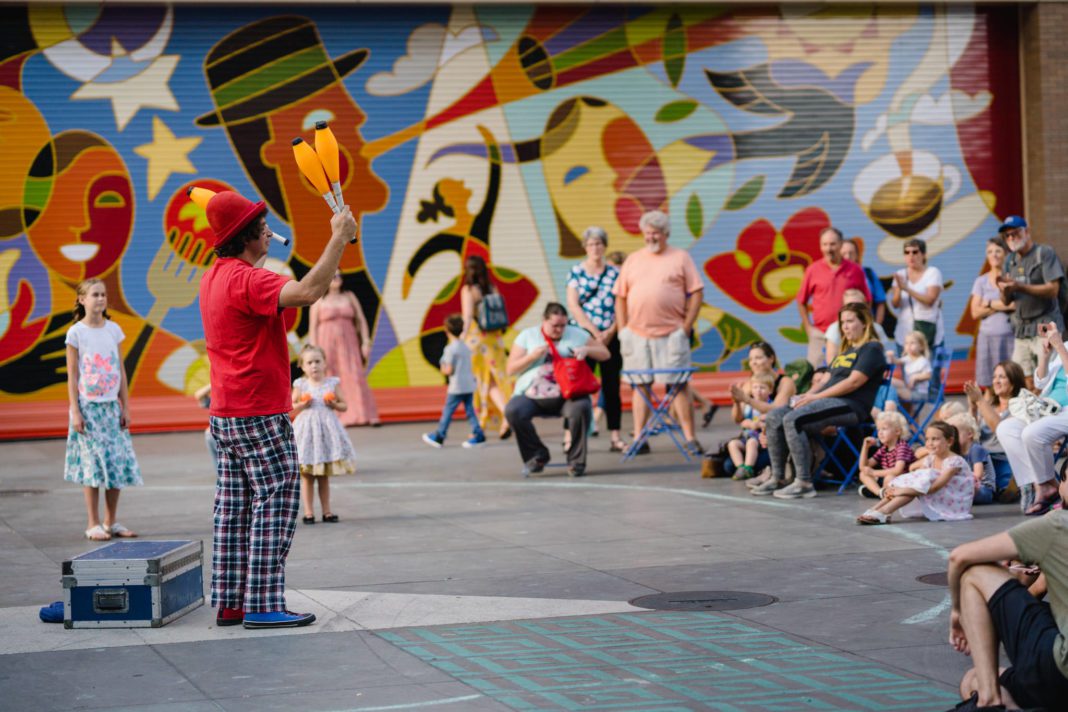 A festival is happening in Salt Lake City this weekend, one that honors the ancient and noble art of street performing. The third annual Busker Fest will feature a number of performers—we’re talking musicians, dancers, jugglers, acrobats and comedians—to the delight of crowds throughout the evening.

Busking itself has been around a while. People have been performing in public spaces for the donations and adoration of a crowd since we had public spaces to do it in. For those who do it, busking has a certain mystique, that…je ne sais quoi.

Marcus Wilson is a local stunt performer and comedian performing at the festival who has been busking on and off for years. “There’s something about it that I really like,” he says. “That you can go out onto the street and, at first, people are like ‘what’s wrong with this guy,’ but, by the end of it, there’s a few hundred people cheering.”

In addition to busking, Wilson engages in other forms of performance, but busking is his favorite. And it’s quite unlike any other kind of performing. “When you’re at a comedy club or venue, the audience has paid to be there, so they will sit in the chair and watch you no matter what,” he says. “If you’re on the street, you have to do something entertaining enough to make people stop. You have to build the crowd up.”

The art of building a crowd is often what separates a novice busker from a master. Wilson’s first foray into busking came when he was hired to perform at an event in Detroit. He went first of the street performers, going through the motions of his juggling routine. “I had a crowd of 10 or 15.,” remembers Wilson. “Not that exciting.” Then the next performer came out. He started doing his act and apparently knew how to gather a crowd. Before he was done, he’d attracted a crowd of a few hundred people. “That’s where I got my education,” Wilson says. “I learned there was more to it than just the performing.”

“It’s not something that everyone can do. There’s a formula,” Wilson says. “Building the crowd and passing the hat—it’s a different skill set. There are a lot of good performers that nevertheless could not succeed on the street.”

Wilson himself started in the party racket. He used to dress up as a Power Ranger and perform at birthday parties, during which time he started to nail down his “comedy juggling stunt show.” He also practiced in comedy clubs, eventually honing a show that features jokes, feats of balance and the juggling of knives, bowling balls and other potentially lethal objects.

When he made it to the street, Wilson traveled all over to busk, doing circle shows along the California coast from Venice Beach and San Diego to Santa Barbara. Unfortunately, there are not many opportunities to practice the art here at home. Salt Lake City is lacking the two main ingredients for regular, successful busking: “room and people,” Wilson says. “There isn’t really a spot on public property with room and crowds of people coming through on an everyday basis.”

That is where Busker Fest comes in. It helps provide the space—by shutting down streets to traffic—and drawing the crowds with partnerships like the one with Open Streets SLC.

Through May 29, Main Street will be open only to foot traffic for Busker Fest and Open Streets (with pop-up busker events continuing throughout June). The event is free to members of the public of all ages, but you should bring cash to show your appreciation and support for the performers. “If you watched the show and you enjoyed it, the performer has provided a service to you. They’re not doing nothing. They’ve put a lot of time and effort into it,” Wilson says.

We have your guide to summer nights downtown in our story on Salt Lake City Open Streets. For more art & entertainment stories, subscribe to Salt Lake magazine’s print issue.

Christie Porterhttps://christieporter.com/
Christie Porter is the managing editor of Salt Lake Magazine. She has worked as a journalist for nearly a decade, writing about everything under the sun, but she really loves writing about nerdy things and the weird stuff. She recently published her first comic book short this year.
Previous article
Craft Lake City Returns with Hundreds of Local Artisans—And Ritt Momney
Next article
Plan-B Theatre’s ‘Local Color’ Highlights POC Artists