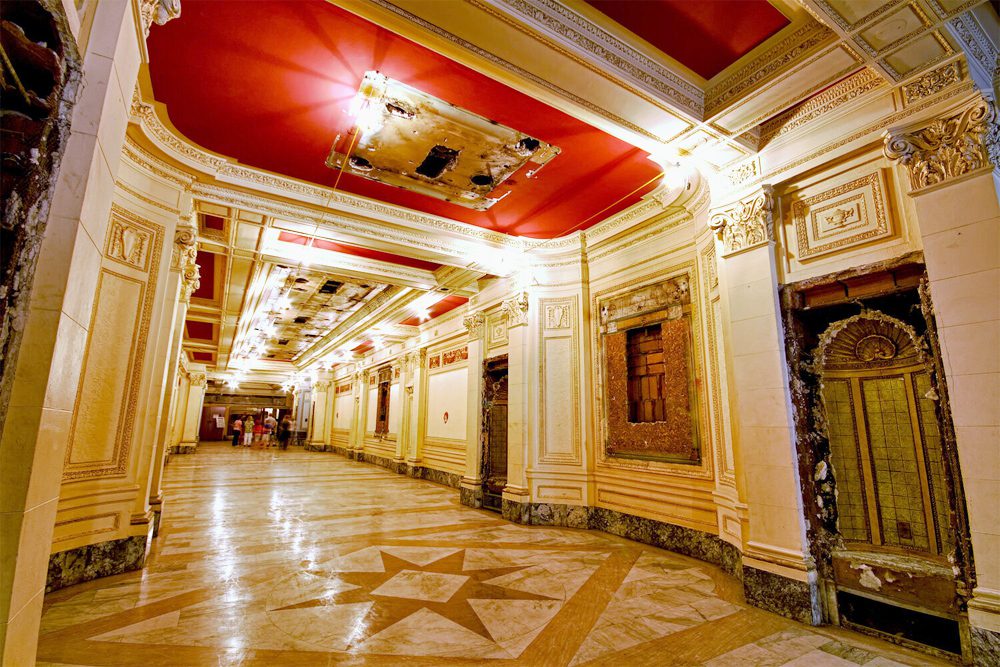 Is It Too Late to Stop Demolition of Historic Utah Theater?

For more than 100 years, the Utah Pantages Theatre has stood on Salt Lake City’s 100 South block of Main Street—no longer a city block, but a chopping block for the now “Utah Theater” and neighboring local businesses.

This particular axe will likely take the form of a deal between the Redevelopment Agency of Salt Lake City, which owns the land, The Hines Group and The LaSalle Group. On the theater’s resting place, the developers propose building a 31-story glass monolith—another tower of high-rise apartments—which would cannibalize some of the theater’s historic remains for its design as a way of preserving them.

The deal is all but done, and those who wish to preserve the Utah Theater in its entirety are fighting for a stay of execution. The non-profit Save the Utah Pantages Cinematic Theatre, which has spearheaded the effort, said Wednesday that some high-profile Utah film groups and organizations will join the fight to save the theater and support the nonprofit’s working plan to renovate and reopen it as a functioning movie theater and film hub.

Meanwhile, a spokesperson for Salt Lake City was emphatic: the city can not entertain any offers on the property because the RDA is already under contract to sell it to Hines and LaSalle. The city’s statement said, “The RDA is under contract with another entity for the purchase of the property and is conducting due diligence accordingly, thus we will not answer any questions about our current agreement or obligations.”

The result is something of a skirmish for the soul of downtown Salt Lake City. The reality stands that Utah and its capital city must increase the supply of available units to stem an ever-worsening housing crisis, but what parts of our past are we willing to sacrifice for a few hundred more apartments? Or, is the infamous theater impossible to feasibly restore, as the RDA claims, and best left to history?

With chipped paint, crumbling columns and collapsed ceilings, the Utah Theater wears every day of its 100 years. The stories and images of the historic building are digitally preserved in the Pantages Theatre Archive. It opened its doors in 1921, the brainchild of Alexander Pantages, a Greek immigrant and a mogul of the vaudeville theater circuit. Pantages built his theater in a style of Greek and Roman revival, and, much like the mythological figures of the civilizations that inspired it, the Pantages Theatre appeared doomed to tragedy.

After a decade of operation, the Pantages family reaped scandal upon scandal to rival the subject of any Greek tragedy. Pantages was charged in court for allegedly sexually assaulting a 17-year-old. A month later, Lois Pantages, his wife, killed a man in a drunk driving incident. Following the 1929 stock market crash, Pantages sold off his theaters. From there, the Utah Theater would change hands and names many times.

It became the Radio Keith-Orpheum Theatre then the Utah R.K.O. Pantages Theatre and underwent decades of closures and renovations and reopenings, eventually falling into disrepair, and finally closing around 1988, before it was acquired by the Redevelopment Agency of Salt Lake City (RDA) in early 2010.

The RDA admits the original plan was to restore and reopen the theater. That seemed to remain the plan at least through 2016, when the city adopted its Downtown Master Plan, listing the intention to “repurpose the Utah Theater as a cultural facility and activity generator.”

The intrigue surrounding the theater only deepened in 2019, when the RDA voted to sell the parcel of land (and the theater and other buildings on it) for redevelopment to two companies for the sum of $0. “I was shocked,” said Michael Valentine, a local filmmaker and founder of Save the Utah Pantages Cinematic Theatre. “We always thought it was going to be restored.” Valentine has been trying to save the theater ever since.

In March of this year, the group launched an effort to get the fate of the Utah Theater on the ballot to “make sure the public has a say in what happens to a public building on public lands purchased with taxpayer money,” said Valentine.

The spokesperson for Salt Lake City said that the attempt to get the issue on the ballot is still in progress with some hurdles yet to clear, such as gathering the requisite number of signatures. “Utah law specifically gives the people co-equal power with the legislative body to initiate a law, and the next step for the proposers is to collect signatures by April 15,” said the statement from the City.

There’s also a change.org petition to save the Utah Theater that, as of this posting, has amassed nearly 7,000 signatures.

Members of the RDA argued that restoration of the theater was not feasible, citing a $60-million price tag and structural, seismic and code compliance issues. Valentine countered with the renovation of the Tacoma Pantages Theatre as a possible example to follow, which is currently an active, functioning venue. Alternatively, reporting by the Utah Investigative Journalism Project for Utah Stories suggests that some well-placed campaign donations may have influenced the decision to redevelop the land.

Save the Utah Pantages Cinematic Theatre has also offered to purchase the theater from the city and revitalize it themselves. The group has grown to include not just filmmakers and movie lovers but teams of architects, construction workers and lawyers—everything they need to make the theater “profitable, sustainable, and protected,” said Valentine.

Their dream for the Utah Theater involves opening it as a 70mm film-viewing experience that would also become home to film educational resources and local film festivals. A “cinema paradise,” said Valentine, who promised proof of concept in the coming weeks.

In the meantime, the RDA continues to move forward with the plan to sell the property for redevelopment. The current plan requires the demolition of the Utah Theater and would also displace a handful of local businesses like Twisted Roots, which has been in its current location for ten years.

The Plan for the Utah Theater

Should the Salt Lake City RDA finalize the deal with Hines and LaSalle, the two would add one of the tallest skyscrapers the city has ever seen to its rapidly changing skyline. The plan for the 392-foot, 31-story high-rise apartment building features:

In exchange for that $0 sale price, the city receives a promise of affordable units, public access and the companies’ maintaining the walkway and green space.

While the deal recently cleared another hurdle at the last RDA board meeting in late March, the public comment period for the project will remain open until April 26. According to the RDA’s web page, the best way to submit comments or questions about the project is to “contact the staff planner via email or leave a voicemail.”

The RDA also has an upcoming public meeting on Tuesday, April 13 at 2 p.m. The RDA is holding all of its meetings electronically, and, if you wish to have a chance to speak, you need to register in advance.

Save the Utah Pantages Cinematic Theatre plans to attend the upcoming meeting. “The community is rallying around this,” said Valentine. “It’s not about politicians or Hines or LaSalle. It’s about saving the theater. It’s about the city and the future and making it a better place. We’re not going to give this up.”

While you’re here, check out our latest print issue of Salt Lake magazine. Click here to follow updates on Utah arts and entertainment.

Christie Porterhttps://christieporter.com/
Christie Porter is the managing editor of Salt Lake Magazine. She has worked as a journalist for nearly a decade, writing about everything under the sun, but she really loves writing about nerdy things and the weird stuff. She recently published her first comic book short this year.
Previous article
Anti-Asian Hate Has Always Been Here. We’re Simply Noticing It More Now.
Next article
Park City Film Welcomes Audiences Back For In-Person Screenings