Load up your four-legged companion of choice and hit the trail.

Ah, the pleasures of backpacking. The ability to disconnect from a modern world is a relief. The vistas are stunning. The satisfaction you feel upon summiting a peak is overwhelming. Is there anything about backpacking that isn’t wonderful? Yup. The backpack. You know, that 40-pound monstrosity that compresses your spine and reduces your knees to creaky hinges. It’s horrible. What if I told you there was a way to achieve all the self-sufficiency of backpacking without the defeated sensibility wrought by sore shoulders?

Various animals are more than happy to do the heavy lifting on the trail with minimal environmental impact, so you can get further into the backcountry with less effort. From goats and llamas to mules and dogs, it turns out animal packing is a lot more common than I thought. I excitedly told a friend who grew up in Durango about working on this article, and he flatly responded, “Oh yeah. Growing up we had two goats with us whenever we went backpacking.” Apparently, I’ve been doing it wrong for a long time. 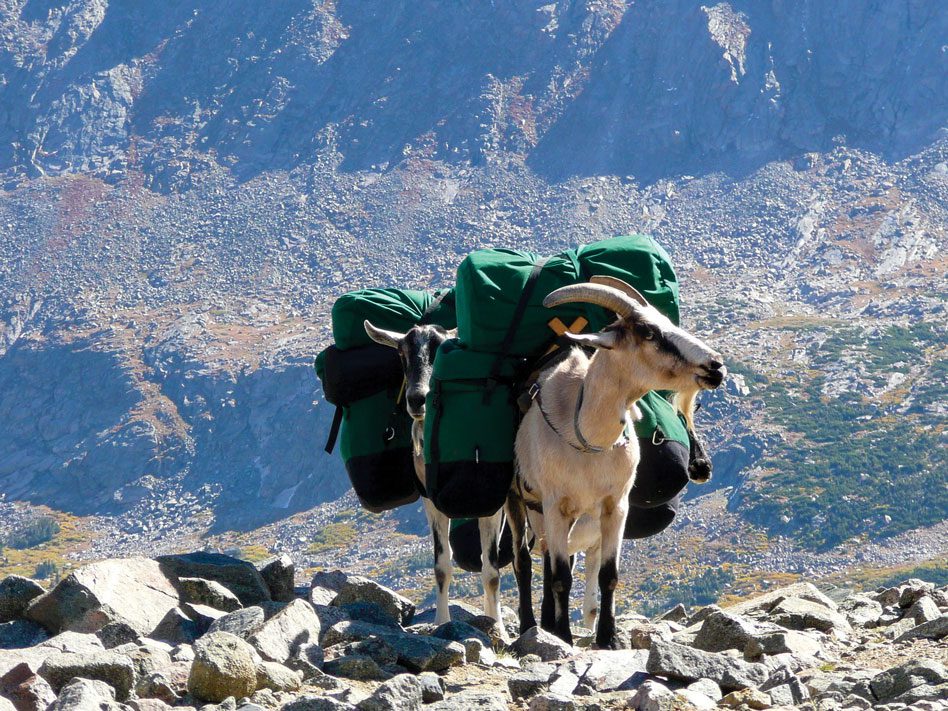 Goats are on fleek right now for their appearances in adorable online videos that have made them the new cats, but they’ve long been ingratiating themselves to humans by being good-natured trail companions. Clay Zimmerman, owner of High Uinta Pack Goats, and his family had been hiking with goats for years before they decided to share the experience with others. For only $35 per goat, per day—there’s a minimum of two goats since they’re adorably social—you get everything you need. That includes a pre-trip training session, saddles, panniers, tie out, rain tarp and food.

“They have the same pace and endurance as normal people,” Zimmerman says. “They can easily average 10 miles per day and some can make it up to 20.” Zimmerman is quick to note that not all goats are suitable to work as pack animals, which is why he rents only the most agreeable: Kiko, Oberhasli and Alpine goats. “They love to be around people, so you never have to worry about them staying with you. They’ll even come sleep in the tent if you leave it open, and they’ll bed down right next to it if you don’t want to let them in.”

Zimmerman is an outfitter, not a guide, but he’ll be happy to recommend areas in the Uinta Mountains, like China Lake and Allsop Lake to hike with his goats. And if you just can’t get enough of the goats, he’s happy to be your best resource when you’re ready to purchase your own.

Prefer your pack animal to come from camelid family? Then llamas are for you. Similar to pack goats, llamas are friendly, easygoing company on a hike. Their physical characteristics, however, differentiate llamas from goats and may mean they’re a better choice for you. Their larger stature means llamas can carry a bit more weight than the average goat—up to 60 pounds. Llamas are relatively big, about twice the size of and completely distinct from alpacas, so if you’re waiting for a lame “packing alpaca” pun, move right along.

Llamas’ feet, which are padded rather than hooved, and grazing habits mean they have a lighter environmental impact than goats or horses, making them a better choice for sensitive trekking areas. Though llamas are less suited than goats for truly harsh, rocky terrain, they are the perfect comrades for adventures in the Uinta Mountains from Mirror Lake to the approaches to King’s Peak.

Utah Valley Llamas rents llamas for $100 a day and also have suitable trailers for lease. Because they’re so easy to handle on the trail, all that’s required is a brief 30-minute orientation.

The Grand Canyon is extremely close to the Utah border, so I’m going to seize it from Arizona, the state that gave us Joe Arpaio, and claim it for the Beehive. You can actually ride a mule down the Grand Canyon, but that’s for lazy chumps. Those of us who are only slightly lazy chumps can strap our gear to mules and make our way to the Colorado River and back to the rim with just a small daypack. Xanterra runs a duffel service where you can strap 30 pounds of gear to a mule to have it shuttled from the Canyon’s south rim to Phantom Ranch at the bottom and back. It costs around $75 each way. Spots at the Phantom Ranch fill up quickly, so be sure to book well in advance. 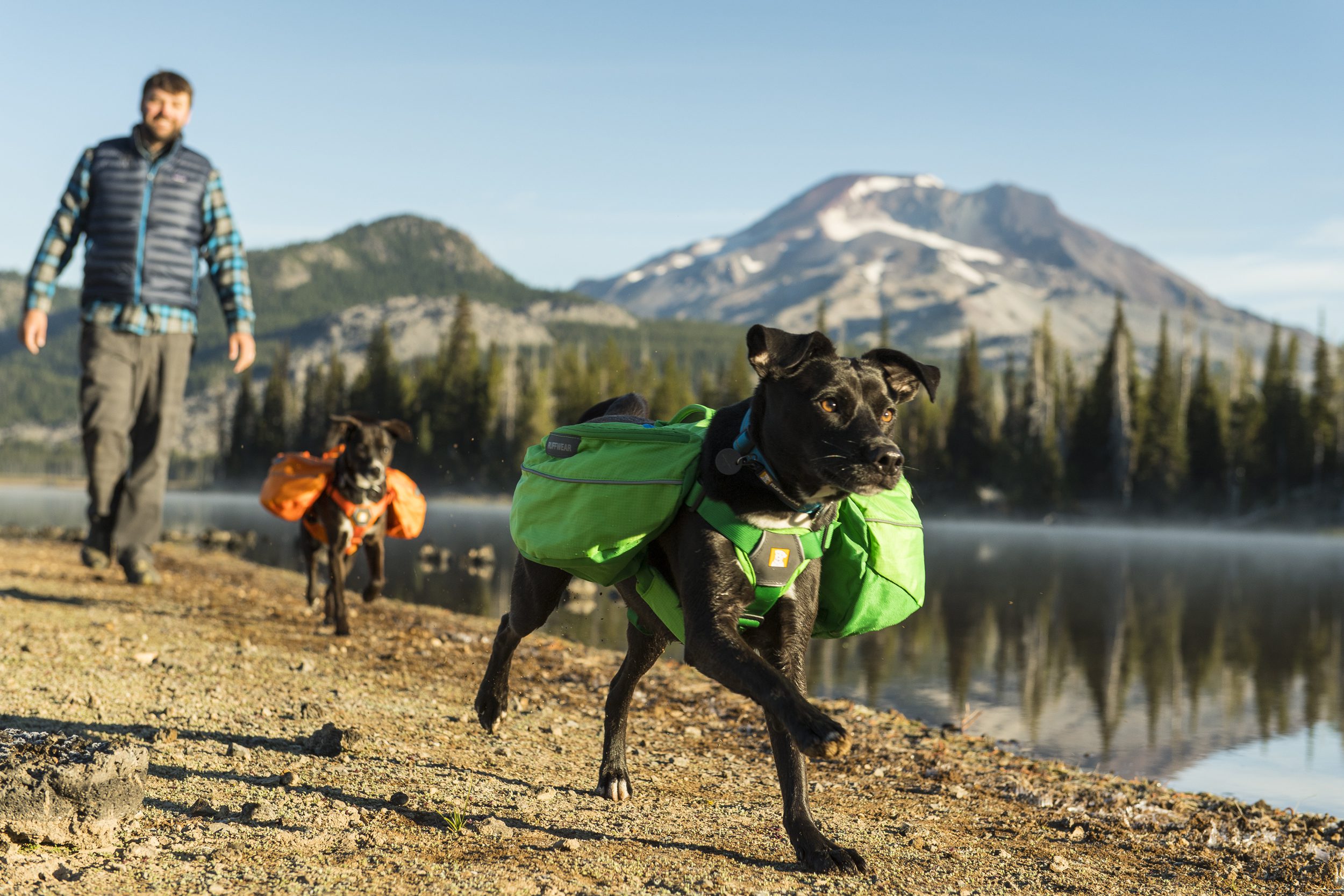 Is Fido frantically pawing at your leg while you read this? If so, you might have a ready-made pack animal in your own home. Don’t get too ambitious; they’re not going to carry 30 pounds of gear like a hired goat, but Ruffwear makes a whole range of gear that will allow your dog to carry its own food, tennis ball and leash. Save a bit of space in your pack while assuaging the feeling your companion is a furry freeloader. Be sure to take it slow at first—do a few test runs near your house and don’t weigh down your dog too much—and, pretty soon, it’s likely a Ruffwear pack will become your pup’s favorite accessory. Ruffwear.com

Tony Gillhttps://www.saltlakemagazine.com/
Tony Gill is the outdoor and Park City editor for Salt Lake Magazine and previously toiled as editor-in-chief of Telemark Skier Magazine. Most of his time ignoring emails is spent aboard an under-geared single-speed on the trails above his home.
Previous article
Express Yourself: The language of social media comes to life.
Next article
Saffron Valley pushes the boundaries of Indian food.