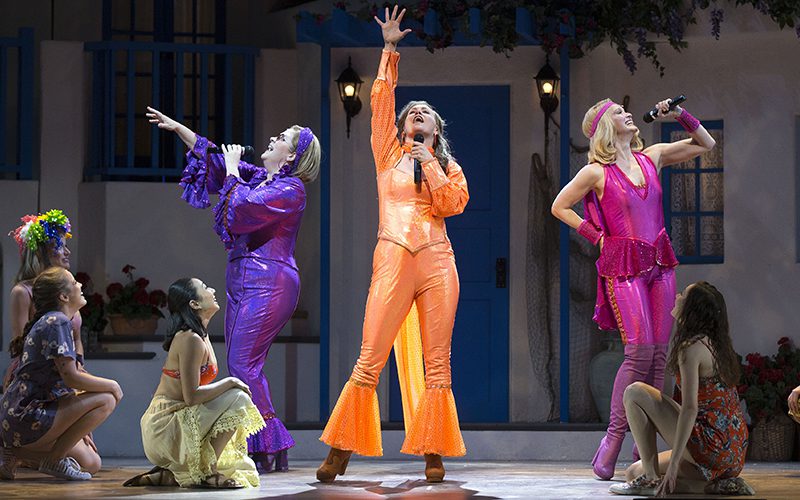 Of course I grew up with ABBA. In fact, the first time I ever saw a music video was at the Idaho State Fair, where the men are men and the sheep are nervous. “Money, Money” was playing on a Laser Disc, remember those? Yeah. I’m old. Also, I like potatoes. Transfixed, however, I became probably the youngest and, perhaps the only, ABBA fan in Idaho Falls. ABBA follows us through life, humming above us unobtrusively in elevators and piped in over the produce at Sprouts. Their feel good, peppy music rarely rises to the point of attention but it doesn’t really annoy.

Which pretty much sums up what I think about the jukebox musical Mamma Mia! Not all jukebox musicals are created equal, some like Beautiful: The Carole King Story, are wonderful slices of a period in music history, incorporating not only King’s music but a lovely cross section of the music of her time—Motown, early rock and folk—as well as a King’s dramatic personal tale. Mamma Mia!, however is stuck with ABBA and, well folks, pretty much every ABBA song is cut from the same loaf of white bread.

See, now you think I’m just going to pan it. But guess what? I like white bread. Oh sure, I love a beautiful multigrain fiberbomb loaf but sometimes I just want to sink my teeth into the pillowy softness of a PB&J on nutrition-less white. I am, after all, from Idaho.

So it was that now days after I saw Pioneer Theater Company’s opening night of Mamma Mia! I can’t get “Dancing Queen” out of my head and I may have changed my ringtone to “Take a Chance on Me.” (OK I did.) The musical is an extremely(!) contrived tale of a single mother Donna Sheridan (Coleen Sexton) living on a greek isle as an innkeeper. Her daughter Sophie Sheridan (Kathryn Brunner) is engaged to marry a guy named Sky (Aidan Wharton) and dreams of meeting the father she’s never known so he can walk her down the aisle. She snoops in her bohemian mother’s journal and comes up with three names—Harry Bright (Paul Castree), Bill Austin (Dan Sharkey) and Sam Carmichael (Brian Sutherland)—all possible candidates for a wild paternity test and invites the trio of her mother’s former lovers to her wedding. Of course (mon deiu!), they all show and we’ve got a wacky biological whodunnit on our hands.

Things started out a little flat from where I was sitting on opening night and I may, may have rolled my eyes a few times. But by the time the entire chorus got onto the stage and became engaged with some awesome choreography by Patricia Wilcox I was tapping my feet and letting all my cares go out the window. It didn’t hurt that Brunner is a gorgeous singer who plays the earnest young bride with plenty of naive Disney dizziness. And then we’ve got the Absolutely Fabulous duo who knew mom back when—Tanya and Rosie (Amy Bodnar and Mary Fanning Driggs)—who bring the laughs, especially Bodnar’s vampish burlesque “Does Your Mother Know?” and Driggs’ hilariously desperate rendition of “Take a Chance on Me.”

Sexton has to carry the show, however, especially the protracted second act section that includes one-on-one interrogations of the three dudes, that plays like one-on-one dates on The Bachelor. She has a great voice and works with what she has, but well, what she has is ABBA. See, not all ABBA songs are created equal and these scenes are boring by virtue of the need to get into ABBA’s deep tracks to carry the plot along. C’mon play the hits!

The men folk are able enough, Sutherland especially so, but face it boys ABBA is a woman’s game, all of the best songs are heavy on the high notes. However, the best part of this whole production is the complex harmonies that ABBA created and the men hold up their end well.

And then there is the set. James Krozner’s origami set makes full use of PMT’s technical capabilities and seamlessly moves and whirls in transition. It’s not razzle-dazzle, just purely competent stagecraft that you won’t notice unless you’re looking, but do notice. Oh, almost forgot! Costume designer Brenda Van Der Wiel must have had a blast designing the outfits for the full-on disco reprise, which is, by itself, worth the price of admission.

C’mon am I really going to talk you out of taking your girl friends out to Mamma Mia! Nope. PTC has here a lovely production of a very, very silly musical, performed with gusto and professionalism. It won’t change your life but it’ll help you escape it for a couple of hours.

Mamma Mia! plays through May 26, 2018 at the Simmons Pioneer Memorial Theater on the University of Utah Campus. Tickets and show times here.

Jeremy Pughhttps://www.saltlakemagazine.com/
Jeremy Pugh is Salt Lake magazine's Editor. He covers culture, history, the outdoors and whatever needs a look. Jeremy is also the author of the book "100 Things to Do in Salt Lake City Before You Die" and the co-author of the history, culture and urban legend guidebook "Secret Salt Lake."
Previous article
Concert Preview: MGMT Find Exigence for Pop in a ‘Little Dark World’
Next article
Single Bite: Duck Rolls