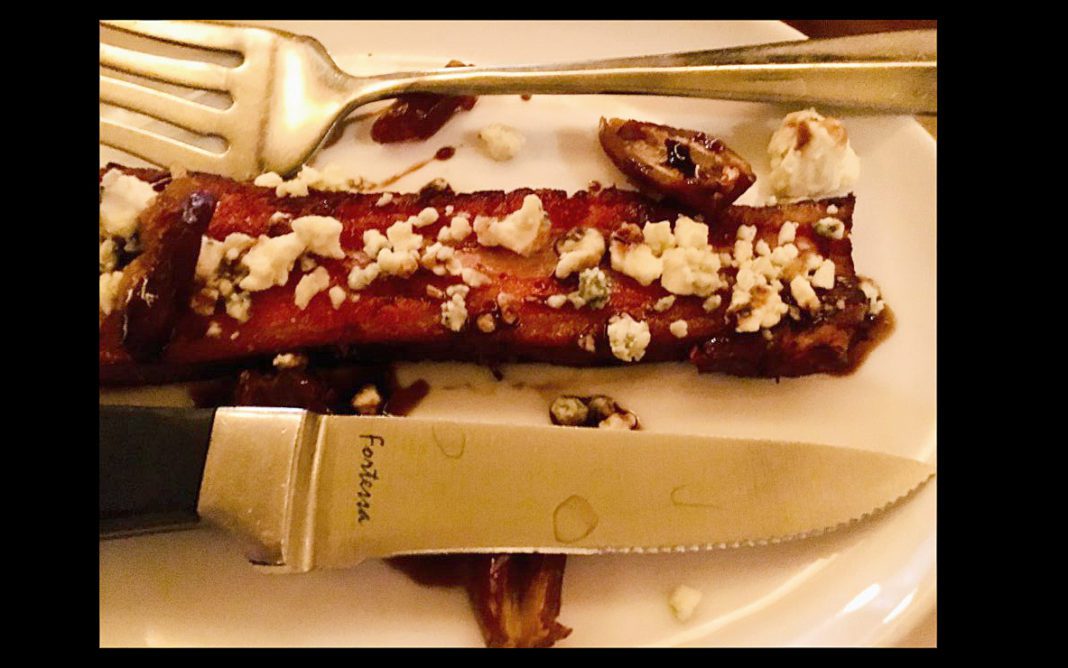 Although I don’t really believe anyone who claims they have grown tired of bacon the way they’ve tired other food trends like quinoa or cauliflower, I am a little weary of chef’s substituting for a more inventive way of adding pizzazz to a dish. It’s an easy solution, I know—bacon does make everything taste better. But after awhile you can become bacon blase—it’s delicious but it doesn’t knock your palate back the way it did a few years ago when the health police decided it was okay to eat and people started getting all hot about apple-smoked and so on. So I was surprised when the high point of a lunch at Spencer’s Steak & Chops was one of the restaurant’s menu standouts: The Millionare’s Bacon.

One strip of bacon was presented as an appetizer. But the bacon was from Daily’s. It was cut a third of an inch thick. This delicious strip was braised until a significant amount of the fat had been rendered, then broiled with blue cheese and figs. You had to eat it with a steak knife and fork. It is the best bacon strip I’ve ever had and I’ve had a few. Stop in the bar at Spencer’s, order some bourbon or a big red wine and a piece of bacon and prove to yourself—once again, I hope—simple delights are the best.

This story was originally published in May of 2018 on saltlakemagazine.com. But the bacon is still delicious.

Mary Brown Maloufhttps://www.saltlakemagazine.com/
Mary Brown Malouf is the late Executive Editor of Salt Lake magazine and Utah's expert on local food and dining. She still does not, however, know how to make a decent cup of coffee.
Previous article
Where to Get Pho and Ramen in Utah
Next article
Review: Melissa Etheridge with Keb’ Mo’