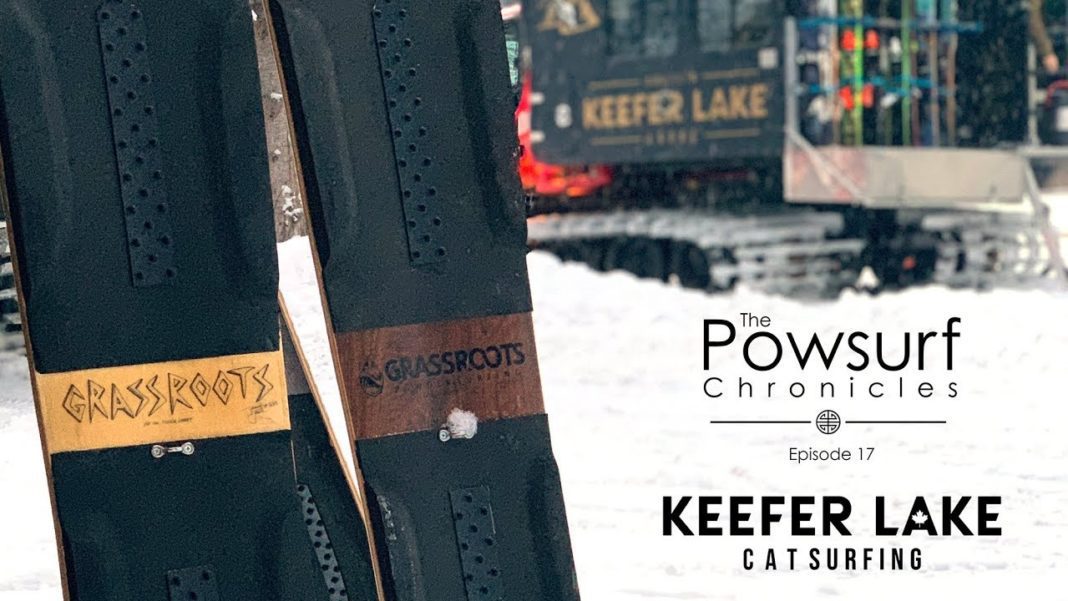 The rapid-fire reverb of surf rock is blaring through the Utah mountains. No, not literally. That’s just the wind. But ya know, in spirit, man. Utahns are starting to ride the powsurfing wave.

“Powsurfing? You mean like snowboarding?” you’re probably asking. Not quite. The nascent movement is the winterized extension of surf and skateboard culture. Unlike on a traditional snowboard, powsurfs eschew any sort of binding, forcing the rider to use balance and nuanced movements to make turns. While powsurfing is a bit more difficult than snowboarding to pick up for people who aren’t avid skateboarders and surfers, it requires less specialized gear. Thus, powsurfing is more affordable and accessible than traditional snow sports, especially when considering the fact it’s done outside of resorts, no lift ticket needed.

Motivated by overcrowded resorts and COVID-induced skier caps and reservation systems, Utahns are seeking a new way to ride the mountains this winter. The surge in backcountry skiing and snowboarding can be seen in the packed trailheads, gear shortages and an unprecedented demand for avalanche education courses. But historically dangerous avalanche conditions this year have highlighted the difficulty and dangers rushing into backcountry without proper preparation.

Enter powsurfing in Utah. The technical challenge of riding without bindings serves to enhance terrain, allowing riders to find fun and challenge without exposing themselves to avalanche terrain—typically understood as slopes which are over 30 degrees in steepness or which are underneath or adjacent to such slopes. The 100-foot hill in your backyard and the rolling terrain in the woods are perfect places for most people to go powsurfing. Think of all the places you’d take your kids sledding. They’re ideal for powsurfing. In fact, parents, go powsurfing when you take your kids sledding!

Powsurfing combines the aesthetics of snowboarding with the agenda-free simplicity and fun of sledding and playing in the snow. Anyone and everyone who enjoys riding on snow can give it a shot.

The sport’s roots can be traced back right here in Utah. That shouldn’t come as a surprise. Powsurfing is best done on soft snow, and what other place has reliably softer snow than the Beehive State? Grassroots Powdersurfing is the brainchild of Utah native Jeremey Jensen, who along with some friends started experimenting with binding-free snowboarding in the late 1990s.

“I grew up loving to surf, skate and snowboard. Powsurfing was a way to blend all the things I love, doing. There’s really no better place to do it” Jensen says. ”

Over time Jensen and crew created an entire line of powsurf shapes designed to excel in a variety of terrain and snow conditions, ultimately selling them under the Grassroots name. Now the industry leader, Grassroots is sticking to its roots continuing to operate from the same place it was born in built in Logan.

Jenson and the Grassroots team push the limits of what’s possible in powsurfing. They regularly shred terrain with speed and style that most people would find challenging on skis or a snowboard, as documented in their YouTube series “The Powsurf Chronicles.” Do note they frequently ride in avalanche terrain, and as Jensen is quick to remind, people should only ride in avalanche terrain if they have the appropriate education and safety gear.

You don’t have to aim for greatness like the Grassroots team to have fun. Take it from this 36-year-old lifelong skier, linking a few turns together down a mellow pow slope is plenty rewarding and fun. “Powsurfing familiar terrain fresh and new. Obviously it’s similar to snowboarding, but it requires more focus. And almost half our customers are skiers. They love getting out of their plastic boots,” Jensen says.

Powsurfs aren’t exactly cheap—they start at $420—but since all you need is a board and a leash like you’d find use on a surfboard the barrier to entry isn’t terribly high. Additional specialized gear is available, but a pair of winter boots, a ski or snowboard jacket and pants, and the willingness to walk up a hill is all you need to get started.

For beginners, Jenson recommends look for a powsurf like the Slasher 140. The three-dimensional base profile and surf-inspired shape make it agile and forgiving in variety of snow conditions and terrain. When you’re ready to give it a try, you can pick up a Grassroots Powsurf on their website. When you’re ready to get back to the roots of riding snow—simplicity and just plain having fun—take a powsurf to snow covered hill near you. We have plenty of those in Utah.

Tony Gillhttps://www.saltlakemagazine.com/
Tony Gill is the outdoor and Park City editor for Salt Lake Magazine and previously toiled as editor-in-chief of Telemark Skier Magazine. Most of his time ignoring emails is spent aboard an under-geared single-speed on the trails above his home.
Previous article
‘Sorting Out Race’ Examines Thrift Store Stereotypes
Next article
SkinSpirit: Faces and Places