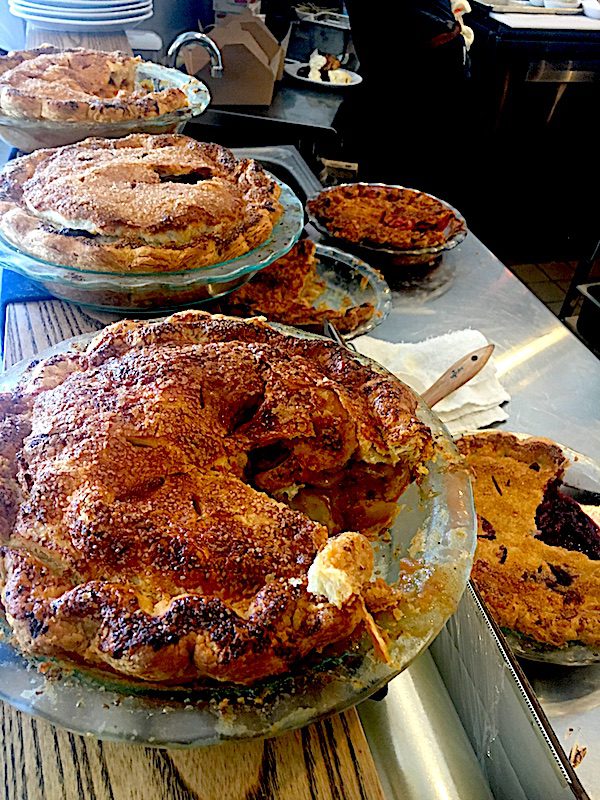 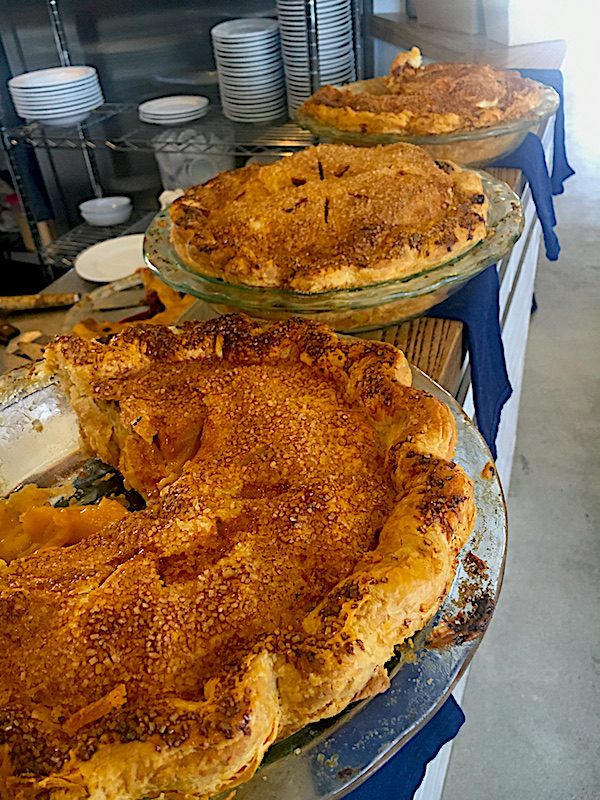 I knew that pie looked familiar.

The menu at Tradition is half pie, and I saw a couple pieces being delivered to neighboring tables, so I curbed my appetite during my first dinner on the deck at the new restaurant by Liberty Park.

I never received a press release about this restaurant or any notice of its inception but I drive by the location often enough that I knew when it opened. We ate there the first night Tradition was open for dinner (they’ve been open for lunch a few weeks.) I’ll be back, just to be fair. And for more pie.

Short notes: An appetizer of funeral potato cakes with bacon jam and the pigs in blankets (Beltex sausage wrapped in croissant dough) were delicious and substantial and would make great bar food which is handy because Tradition has one. The leg and thigh of an enormous chicken were fried in a crisp and very spicy crust, served with creamy cheese grits and collard greens. Big chunks of braised pork came with sweet potato hash.

Like I said. More later. The point is the pie looking familiar and me being right about it. Turns out the owners of Tradition are Ashton and Max—Max owns Burr Trail Grill in Boulder, Utah. Famous for its pies. We tried the berry ginger with homemade ice cream. Pie to die for. 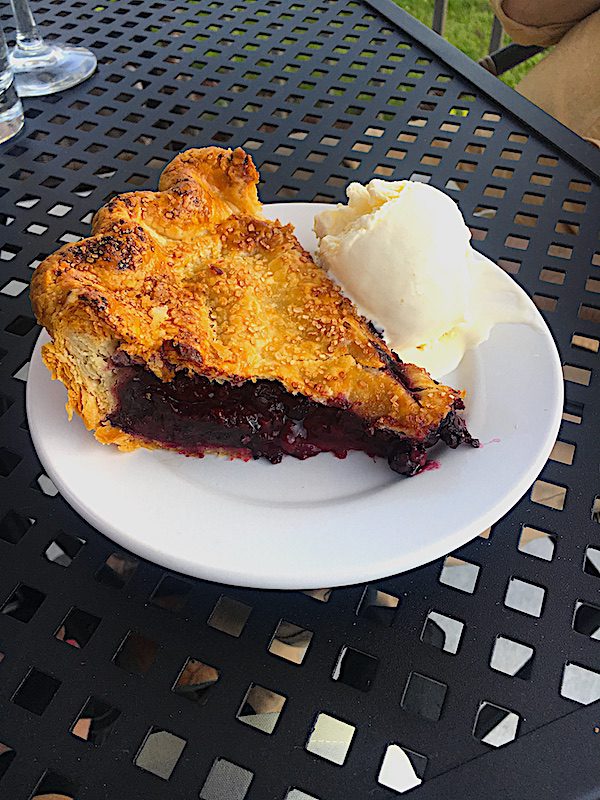 A few days later, we stopped by for lunch and ate inside—familiar story: very cool décor, loud as a Friday night at Club Jam. Cool young servers, mostly without a clue. So we felt justified ordering a glass of wine to go with our burger and Reuben. Meat comes from Beltex Meats next door and the burger patty was cooked rare as requested and definitely worth risking my health for. 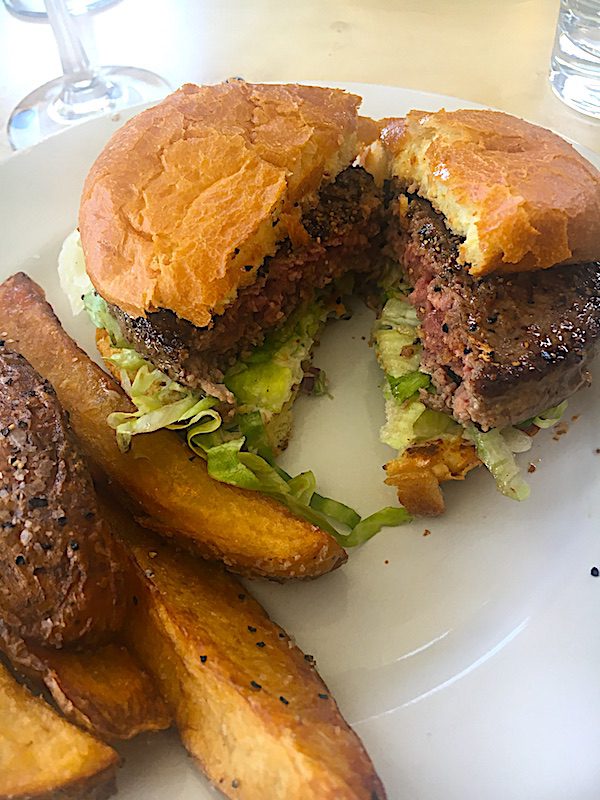 The Reuben wasn’t quite—the house-corned beef was more like uncorned brisket and the sauerkraut was more like slaw (And does anyone anywhere make anything but marble rye? Did rye bread just die?) but it was a delicious sandwich and my mouth waters a little bit when I think of it. Of course, we had to take half our sandwiches home, because, pie. We tried the chocolate bourbon cream this time, a one-crust pie topped with whipped cream and so intense we almost couldn’t eat all of it. 501 E. 900 South, SLC, 385-202-7167 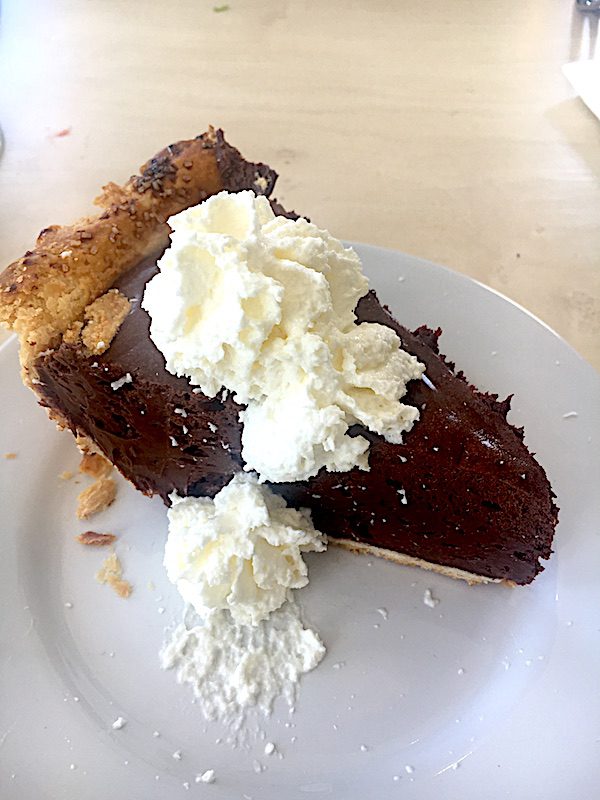 Mary Brown Maloufhttps://www.saltlakemagazine.com/
Mary Brown Malouf is the late Executive Editor of Salt Lake magazine and Utah's expert on local food and dining. She still does not, however, know how to make a decent cup of coffee.
Previous article
Democracy in the Park City Free State
Next article
Contemporary Art: It's about dudes at God Hates Robots.