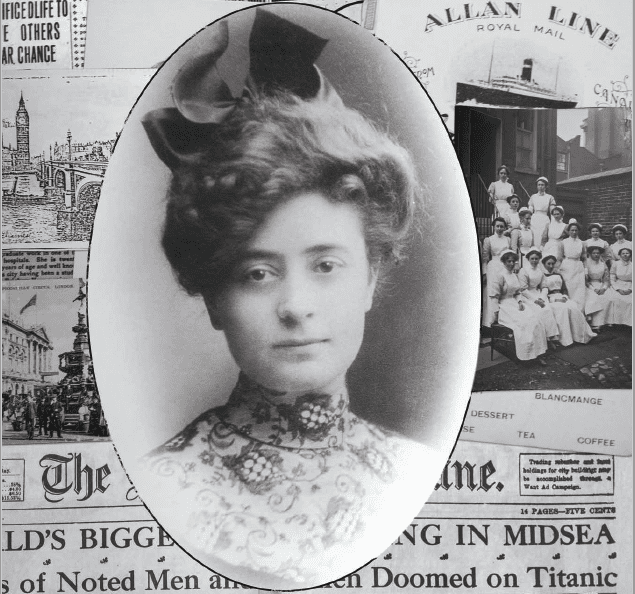 Why Was Utah’s Only Titanic Passenger Not Among the Survivors?

At Payson’s Peteetneet Museum and Cultural Arts Center, Salt Lake residents Liz Corbett Plumb and her 13-year-old daughter, Grace, take in the antique wooden desks and tidy blackboard of a classroom that once belonged to Liz’s great-grandmother, Irene Corbett. A whip-smart teacher who molded young minds during the dawn of the 20th century, Irene is memorialized in an exhibit at the museum for her inspirational life—underscored by her tragically famous and perhaps even more inspirational death.

Pulling a treasured artifact from her purse, Liz holds the postcard up against an enlarged copy displayed prominently on one wall. Dated April 1, 1912, the card bears an illustration of London’s Piccadilly Circus on one side and Irene’s gracefully sloping scrawl on the back with her ill-fated words, “Finish London soon—am going to sail on one of the biggest ships afloat: the Titanic, an American Liner.”

This was the last dispatch from 30-year-old Irene, the only Utahn aboard the RMS Titanic. She drowned with more than 1,500 passengers hours after the liner struck an iceberg in the early hours of April 15, 1912 sinking to the ocean floor in the frigid north Atlantic on its way from Southampton to New York.

“Although we’ll never know how she spent her final hours that night, the fact that she wasn’t among the survivors gives us a remarkable clue,” says Liz. “Her family always felt she gave her own life for others.”

It’s a bold declaration. More than half of the passengers went down with the ship. But a closer look at the survivors puts the Corbett family’s inklings into sharp focus.

Irene’s second-class cabin was on the upper decks of the ship. She was among the more affluent women and children on these decks who had a head start loading into the dismally inadequate supply of lifeboats. (The majority of passengers held third class, or steerage, tickets and were held back from entering the upper decks). That’s why 93% of women and children from upper-deck cabins made it out alive.

But Irene didn’t. The question “why?” haunts her family.

Without the Prophet’s Blessing

“Protective” measures for women were the norm in the early 20th century. A Supreme Court decision in 1908 reflected the sentiment of the time, finding that a woman, like a child, ‘‘has been looked upon in the courts as needing especial care (sic) … she is properly placed in a class by herself, and legislation designed for her protection may be sustained.’’

As part of her teaching contract with the school, Irene signed her name to what, to modern eyes, would be a draconian set of rules for female teachers, especially an outspoken suffragette like Irene. Her contract forbade her from keeping the company of men, leaving home in the evening, traveling without permission, wearing any less than two petticoats or even visiting the local ice cream parlor.

When she met and married Walter Corbett, Irene was immediately forced to forfeit her contract and give up her classroom. She had broken her contract by dating Walter. Undeterred, she turned her attention to raising her young family and a new course of study, nursing, at the Brigham Young Academy in Provo.

“She was ahead of her time,” says Liz. “She wanted a family but also cared deeply about a fulfilling career.”

Irene soon found her calling in obstetrics, assisting physicians with deliveries. The highs of aiding in a healthy birth were, however, diminished with the frequent lows in losing a patient to childbirth, and Irene soon discovered that medical standards in her community were lacking. Troubled, she learned of a six-month training opportunity thousands of miles away at London’s Lying-In Hospital—a program unmatched by anything offered close to home. Irene’s medical colleagues and parents urged her to go—but her husband and his family? Not so much.

“She was an incredibly selfless person,” says Liz of the lore surrounding her great-grandmother. “She saw it as her calling to save lives. But her husband’s family thought it was too far away and they discouraged her from going.”

A niece of the Mormon Prophet Joseph F. Smith, Walter’s mother went to the great effort of arranging a meeting between the Prophet and her daughter-in-law in the hopes that he would convince her against the journey. But Irene remained determined.

Amid a flurry of finger-wagging and gossip, she left Payson and crossed the Atlantic without the Prophet’s blessing, leaving their three children: Walter, 5; Roene, 3; and Mack, 18 months; in the care of her parents who had mortgaged their farm to pay her tuition.

Teacher is not to get married.
This contract becomes null and void of the teacher marries.

Teacher is not to keep the company of men.

Teacher must be home between the hours of 8 p.m. and 6 a.m. unless in attendance at a school function.

Teacher may not loiter downtown in the ice cream parlors.

Teacher may not leave town at any time without the permission of the Chairman of the Board of Trustees.

Teacher is not to smoke cigarettes or drink wine, beer or whiskey. This contract becomes null and void if the teacher is caught smoking, or drinking wine, beer, or whiskey.

Teacher may not ride
in a carriage with any man except her father or brother.

Teacher is not to dress
in bright colors.

Teacher may not dye her hair.

Teacher will not wear dresses
more than two inches above the ankle.

Teacher is to wear at least
two petticoats.

Teacher is to bring a bucket to school to clean and scrub the building every week.

The 1914 city streets of her new home would have been filled with whizzing bicycles, lumbering horse-drawn carriages and double-decker busses plastered with hand-painted signs touting everything from castor oil to cabbages. Men in long coats, sporting pocket watches and bowler hats and women in long frocks and elaborate haberdashery would have dotted the landscape of her York Road residence in Lambeth near the hospital.

For one unfamiliar with city life, the current class-struggle would have sharpened every angle of London’s turbulence, and Irene was given a front-row seat by treating the city’s very poorest. Letters to home described undernourished and flea-infested children hanging on the ragged skirts of her patients. A coal shortage would have lent no firelight comfort to the damp hospital and smashed shop windows—compliments of London’s West End Suffragettes—would have dotted Irene’s walks through the city. To the Provo Daily Herald, she sent articles detailing her experiences, discussing the plight of women in England and speaking out in favor of their rights.

“I am so glad to have this privilege [to study in London],” she penned in the bespoke final postcard, sealed in an envelope alongside a photograph of her small graduating class. She’d recently booked passage on the Titanic, longing for a swift reunion with her family. Then, reflecting on her grandmother’s treacherous sea voyage from

England as a Mormon convert, she added: “I shall enjoy the trip home, which will be quite different to the one my dear grandma took years ago with little comfort.”

A Family and Community Divided

While Irene probably didn’t take kindly to the rules for teachers at her first job in Payson, the protective mindset toward women needing “especial care” might have saved her life when tragedy struck the Titanic.

First and second-class women and children were eased into lifeboats while most men chivalrously stood aside. Yet, as a nurse, fiercely loyal to her call, perhaps Irene never saw herself in need of protection, but as one who might offer it to others.

In the days after the ship’s sinking, Irene’s whereabouts were unknown. Provo’s The Herald Republican’s headline read: “Provo Woman Among Missing; Family Hopeful.”

Four days later, on Saturday, April 19, 1912, a Deseret News article reported: “Hope abandoned for Mrs. Corbett’s safety … [it is an] inevitable conclusion that she perished in the waves with the untold numbers whose certain death will never be recorded.”

A posthumous Utah celebrity, speculation over Irene’s death swirled like debris in a dust devil. Some saw Irene’s tragedy as a cautionary tale.

“It was a big deal in her hometown,” Plumb says. Her great- grandmother’s decisions divided both her family and her community, causing a half-century rift between the Corbetts and the Colvins.

“People were saying she shouldn’t have gone against the Prophet,” Liz says. “But those who knew her intimately felt she was a hero— that it was her devotion to her faith that nudged her to England because she so badly wanted to help people, and that she likely used her last breath doing just that.”

Irene’s husband Walter continued on as a loving father, Liz says, but his children remained in the care of his in-laws. He soon remarried, but tragically died a few years later while undergoing surgery. In the home of Irene’s parents where Liz’s grandfather was raised, Irene’s name was spoken with reverence.

“My grandpa Mack grew up inspired by stories about his mother and they’ve made their way to me,” says Liz, adding she’s felt a kinship with Irene through her life. “I’ve always been drawn to adventure, to traveling to unusual places. Even when I was young I wasn’t afraid to go out and see the world. I think there’s a little bit of Irene in me.”

Liz says she hopes her great-grandmother’s generosity, determination and strength course through her veins as well, and that this strong female figure will inspire her five children— especially her only daughter, Grace.

“People who knew her best said Irene was selfless to a fault,” she says. “Besides being an adventurous woman, Irene had a strong sense of duty to humanity—that’s why she went to London in the first place. Her family agreed that it would have been ‘so like Irene’ if her final act was giving her own life for another.”

In 2012, the 100th anniversary of the Titanic’s sinking, The Church of Jesus Christ of Latter-day Saints paid tribute to Irene during its worldwide Salt Lake conference.

“It was her great desire to make a difference in the world,” leader Quentin L. Cook said after telling her story. “She was careful, thoughtful, prayerful and valiant.”

It’s a sentiment already well-known to Liz and her family—but, she says, it was nice to hear the church acknowledge her great-grandmother.

The Corbett and Colvin families’ proud ancestral tapestry comprises hardscrabble pioneers, hardworking farmers and faith-filled figureheads. But the strong-minded, doggedly selfless Irene has perhaps become the preeminent thread from which her progenitors draw strength. Now a new generation is looking to her legacy as they pave their own trail.

“I would have loved to have known her,” says Grace, glancing once more at the photo of her great-great-grandmother. “I love hearing that she did what she loved and she didn’t let anyone stop her.”