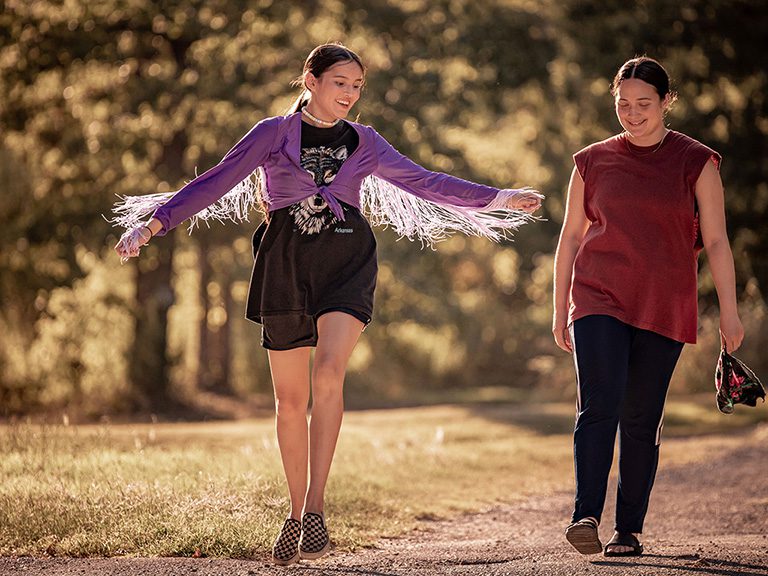 The emotional narrative of Erica Tremblay’s Fancy Dance is as simple as its baroque surface is complex. Roki (Isabel Delroy-Olson), a teenaged girl living on the Seneca-Cayuga Reservation, in Oklahoma, has been hanging close to her aunt Jax ever since her mother Tawi, Jax’s sister, went missing. They’re both worried, but Jax (Lily Gladstone) is a master of dissemblance. It’s her superpower. So she appears calm, imperturbable as she reassures Roki that, yes, Tawi will come home in time to dance with her daughter at the upcoming powwow in Oklahoma City. In fact, though, out of Roki’s view, Jax is frantically seeking information about her sister’s whereabouts.

Jax and Tawi’s brother by another father, JJ, is a cop on the reservation, but he’s not much help, hamstrung in part by federal jurisdiction over missing persons. The sisters’ father, Frank, a white man who has little contact with his daughters since their mother died and he remarried to a white woman, might be better able to pressure the Feds, Jax thinks, but he and his wife Nancy have a more pressing interest in giving Roki a better life—off the reservation. Meanwhile, the terse and deeply sinister Boo presides over the local pawn shop, the center of a nefarious drug network that entangles the strip club where Tawi worked and a nearby RV camp, filled with rough, mostly white miners.

By the time we’ve been situated in this dramatic landscape, relatively early in the film, and a further complication has been added, with Child Protective Services wanting to take Roki out of Jax’s care because of her shady past, we may assume that we will never see Tawi onscreen, except in the missing person posters Jax has spread everywhere. We are expected to understand that, whatever happens, she has joined, at least for a time, the growing roll of Murdered and Missing Indigenous Women. But asserting that, dramatizing that, is not the film’s point. The time pressure of the imminent powwow, just a week or so away, will drive Jax to extraordinary measures and great personal risk to avoid witnessing, or causing, her niece’s disappointment. Roki’s innocent desire to dance with her mother, is the only thing that seems to really matter to her, the ultimate enactment not just of their familial bond, but also of the unbreakable attachment Roki has to her culture, which is also performed in the more or less private dialogues she and Jax engage in when they speak Cayuga together.

In a sense, Fancy Dance is a buddy-road picture, with Jax and Roki setting off, the law in their wake, for the powwow. Along the way, Tremblay provides a troubling and revealing panorama of the deep challenges of Native life in contemporary America, not just the limited resources and opportunities of reservation life, but also the marginalization to the point of erasure Native Americans experience just outside the reservation’s borders. Nancy becomes, seemingly despite herself, a kind of emblem of white ignorance and generations of oppression. While not mean spirited, she is, perhaps, the greatest villain of the film because she’s incapable of seeing the harm she does, that has been done since the moment of contact.

In this light, Fancy Dance is really a film about love, about the protection and sense of responsibility enacted through Jax and Roki’s relationship, which Gladstone and Delroy-Olson perform so beautifully and effortlessly. This, too, is a kind of dance. It’s not always pretty. Unity can be a struggle. But the surety of Jax and Roki’s commitment to each other is also a commitment to their culture, and the film’s greatest asset. So many forces, driven by so many motives, line up to crush their bond. But it persists. And it signifies commitments much greater than the two women, providing a quiet and convincing center for Fancy Dance. Like the circle within which the powwow is performed, the embrace of a living culture, its traditions and their significance, stands in defiant contrast to the grim threatening world all around.

Michael Mejiahttp://www.saltlakemagazine.com
Novelist and University of Utah professor Michael Mejia is a veteran crew member of such Hollywood classics as Carnasaur, Love, Cheat, and Steal, and The Day My Parents Ran Away.
Previous article
Sundance 2023 Film Review: birth/rebirth
Next article
Rediscovering Lost Liquor With Waterpocket Distillery