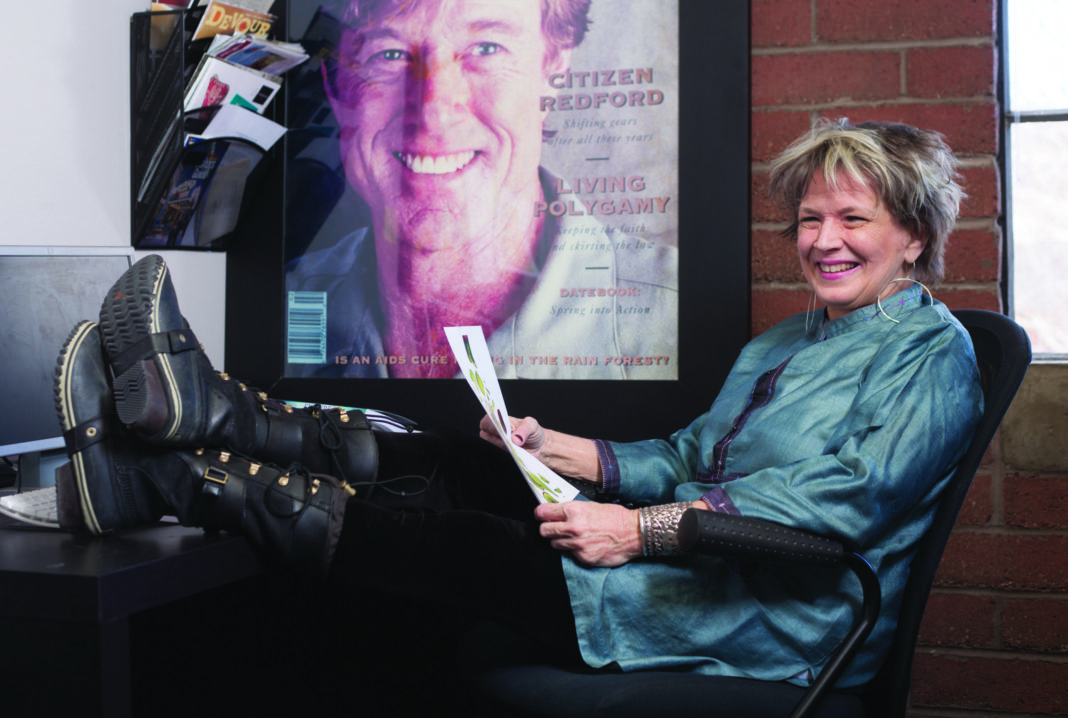 After missing a year in 2020, the Utah Restaurant Association Restaurant Industry Awards Gala returned to honor excellence within Utah’s foodservice industry. Among the honorees, the late, great Salt Lake magazine editor and food maven Mary Brown Malouf posthumously received their Excellence in Food Journalism Award for her contributions encouraging the food community to be the best it could possibly be.

“Let’s just say, when Mary was in your restaurant, you knew it,” said Melva Sine, President and CEO of the Utah Restaurant Association, who presented the award. Malouf’s daughter, Anna, and nephew attended the event to receive it in her name.

“Mary would have hated this,” said Anna Malouf upon accepting the honor for her mother.

Mary’s tenure as executive editor of Salt Lake began in August 2007. Her reputation as a feared food critic at Dallas’ D magazine and The Salt Lake Tribune preceded her but it was her keen mind and her crackling writing that is why she became the longest-serving editor in Salt Lake magazine’s 30-plus-year history. Mary spoke the language of the kitchen, the lingo of servers, the banter of the bar—the Esperanto of anyone who has ever waited on a table, slung a drink, cleaned a grease trap or prepped on the line. But she also knew the language of dining, being served and what a diner should expect. She was critical on both sides of that divide. Cajoling, teasing the best from the back of the house and lecturing Utah diners on not just where to eat but how to eat and to dare their palates and pocketbooks on local food. She respected food and the people who make it; she understood the life of a chef and the language of service. Her work defined and championed our city’s culture.

More than 300 people packed into the Grand Ballroom in the Union Depot Building at The Gateway in Salt Lake City on June 30 for the awards gala—most of them members of the restaurant industry—to celebrate each other and mourn what they had lost during the previous year.

The Utah Restaurant Association had intended to honor Malouf last year, before she passed away in December 2020. But the world had other plans, and the pandemic postponed the gala. The moment eventually did come, over a year later and months after when the gala is usually held in the spring. For those who attended, it was a moment of community and grieving and appreciation for the giants of the industry, and their first chance to mourn collectively.

“We’ve weathered an unfathomable storm, we are still weathering it. We are recovering and WE ARE NOT recovered,” said Sine at the gala. “But we are doing it united, together and in support of one another. We know there are many restaurants, peers, and people who we lost this year.”

Another giant of Utah’s restaurant scene, the late Tony Caputo received the URA Legacy award. The award is given to those who leave a lasting legacy on Utah’s culinary landscape. “It’s rare to say that one person can impact the trajectory of an entire industry,” said Sine, “But Tony Caputo did just that while simultaneously contributing to shaping the community of Salt Lake City.” Matt Caputo, Tony’s son, accepted the award in his father’s stead.

Other winners included Chef of the Year Phelix Gardener of Pago. Wood.Ash.Rye, Nomad East, Ginger Street and Crown Burger were among those restaurants receiving the Concept of the year award. Scott Evans, the Founder and President of Pago Restaurant Group, took home the coveted Golden Spoon award as Utah’s 2021 Restaurateur of the Year. Cherie Bartleson from SLC Eatery received the Heart of The Industry Front of House award and Executive Chef Justin Shifflett of Stoneground Kitchen and Francis Fecteau of Libations Inc. received the Heart of the Industry MVP award.

Christie Porterhttps://christieporter.com/
Christie Porter is the managing editor of Salt Lake Magazine. She has worked as a journalist for nearly a decade, writing about everything under the sun, but she really loves writing about nerdy things and the weird stuff. She recently published her first comic book short this year.
Previous article
Color Your Closet: Summer Dress
Next article
Where to Get Mac and Cheese in Utah