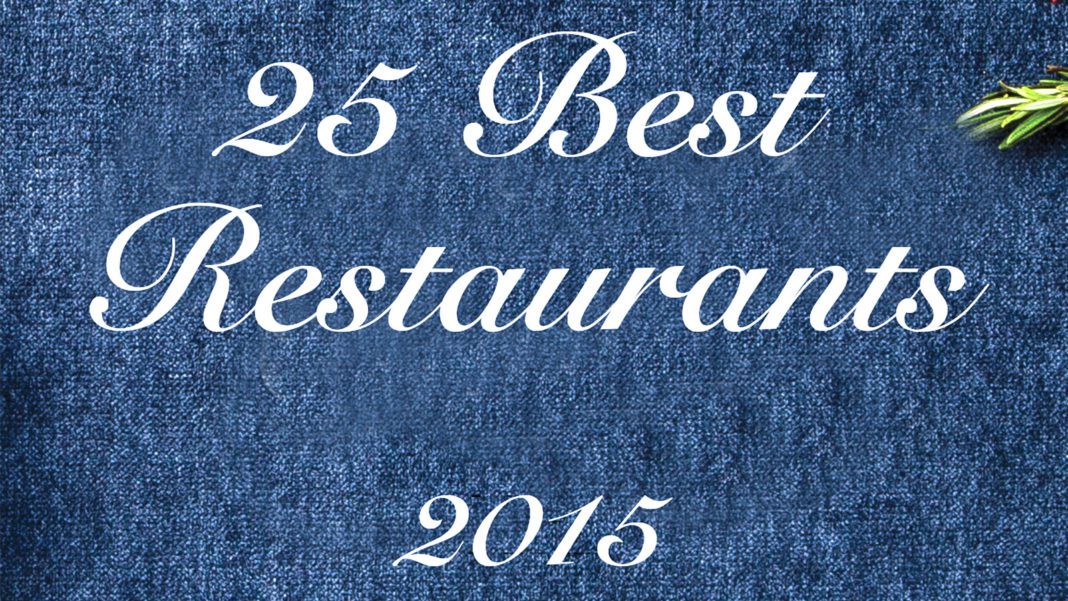 This year, we’re breaking down the boundaries.

We are simply presenting awards to the top 25 restaurants in Utah. High standards of service, the best quality of food, comfort, beauty, hospitality and above all, uniqueness, are the standards by which all restaurants should be measured, whether they are casual or elegant, whether they serve hot dogs or haute cuisine, Thai or Mexican food.

To arrive at this list we talked to food experts, dedicated amateurs and restaurateurs. But in the end, these are our picks. De gustibus non disputandum est, after all.

Here they are—in NO PARTICULAR ORDER at all.

Why: Ryan Lowder has pretty much copper-plated the city. All three of his restaurants are good, but Copper Common, billed as a bar, is exceptional—partly because it created its own adults-only niche and then filled it. The food has Lowder’s signature heartiness and the interior has the eclectic coziness we love from designer Rachel Hodson. At the Common, it all comes together in an uncommon success.

Why: Briar Handly made his name at Talisker on Main where he had to represent the brand of a luxury real estate company and a ski resort. But his eponymous restaurant, Handle,  is unabashedly heart-and-soul Handly. The young chef’s signature style is daringly pure and unembellished, like an edible haiku. Small plates feature a star ingredient, simply and expertly prepared with just enough accent flavors to bring a food to its full potential.

Why: Eric DeBonis was one of the founders of the food scene in Utah and continues to innovate, but his classic French restaurant focused on local ingredients remains his star enterprise. Chef Emmanuel Levarek’s French connections and DeBonis’ natural fanaticism account for the authenticity of the food and atmosphere that has never rigidified into continental stuffiness. Sitting at the Zinc Bar at The Paris Bistro enjoying steak frites and a glass of Bourgogne, it’s easy to imagine you are in fact in a Paris bistro.

The Apex of Taco

Why: Utah has been blanketed with tacos, from Don Rafa’s carnitas cart by Sears on State Street to the extravagant duck confit tacos at Taqueria 27. The best are found at Bleu Adams and Mark Daniel Mason’s soulful little restaurant, which—in a reversal of the usual migration pattern—is an outpost of a Provo restaurant. We love BP’s ingenious relationship with next-door bar Dick N’ Dixie’s that allowed Blue Poblano  diners to enjoy a margarita via a hole in the adjoining wall. We also love that they now have a bar of their own.

Why: Colton Soelberg and Joseph McRae invented contemporary dining in Provo, and though several restaurants have opened in their wake, Communal still owns the category. The duo—with Chef de Cuisine John Newman—balance contradictory elements: refined but rootsy cooking, local but exotic ingredients and an elegant family style- that reflects the authentic culture of new Provo.

Why: Salt Lake’s Greek heritage means we have dozens of Greek restaurants around town. But Aristo’s rises far above gyro joints. The menu evolves constantly, deriving fresh inspiration from Hellas itself via owner Aristo Boutsikakis’ frequent trips to the homeland. And because Aristo is a fearless innovator, few SLC restaurants stay so far ahead of the curve.

Why: The trio of Jerry and Kestrel Liedtke and Robin Fairchild created an idiosyncratic oasis in a city that’s often considered hidebound and hesitant. The Tin Angel Café  is exuberant, experimental, unconventional—this is a place that puts the fun back in food. But the blackout dinners at Halloween, Bloody Mary sliders and funky art are backed by Jerry Liedtke’s solid skill in the kitchen. No funny stuff there.

Why: “Local” is a nationwide trend now, but Scott Evans built Pago around the ethos six years ago. Pago was not only the first restaurant in SLC to source locally, but to stick to the philosophy through ups and downs and a changing kitchen cast. Evans’ stubborn ideology has inspired imitators, jump-started farms and supported food producers. Sometimes karma comes around and Evans has expanded rapidly lately, opening two restaurants in one month last winter with Phelix Gardner as the apparently permanent leader at the stove.

Why: Gourmets on the coasts don’t believe fine dining is possible in Utah, much less in the outermost Middle of Nowhere, Utah. But contrarians Blake Spalding and Jen Castle, owners of Hell’s Backbone Grill in Boulder, love proving the know-it-alls wrong, and they do it in spades (and with spades, growing a big percentage of the food they serve on their own organic farm). They tell their tale in two beautiful cookbooks and sell from-the-farm pickles and jams at the Salt Lake Farmers Market.

Why: Jorge Fierro’s Frida Bistro is based on a love of two countries and cultures that sadly don’t always convivially coexist—the land of his birth and his adopted home. The food is centered in a cultural context, a Mexico that too few Americans know about. Sophisticated dishes with earthy roots—like huitlacoche quesadilla and chile en nogada—combine French finesse with Latin gusto.

Why: Idealism is outside the norm for resort restaurants, but The Farm Restaurant was founded on locavore principles and chef Steven Musolf is true to its roots. The unpretentious but elegant menu relies on local cheeses like Gold Creek and Beehive, Utah trout and vegetables from Zoe’s Garden, and is defined by flavor—meaning tenderloin of beef and broccoli casserole are comfortable side by side.

Why: The trio of owners conceived Rye Diner & Drinks  to satisfy after-hours rockers at the Urban Lounge, and its hours still accommodate that. Meanwhile, Chef Tommy Nguyen has made it a destination for everyone, anytime. The hipster vibe permeates the place, but its palatal attractions are classic. Crisp, light waffles. Eggs scrambled very slowly, so they stay creamy. Heavenly fried chicken. Where else can you eat breakfast for lunch and order a cocktail?

Why: Size doesn’t matter. The tiny space and quasi-clandestine location (in the back of The King’s English Bookshop) have always been big pluses for this enduringly charming restaurant, Fresco. Owner Mikel Trapp has had the wisdom not only to leave Fresco’s dimensions alone, but to make sure his chefs (now Adrian Rose) keep the menu in proportion. There are four entrées on the menu right now, not counting pastas—pork, beef, chicken and vegetarian. But they are all sublime.

Why: Matthew Lake raised the bar for Mexican food in Salt Lake City at Alamexo by combining authentic technique with sustainably and carefully sourced ingredients. The result: familiar flavors and favorite dishes—like enchiladas—elevated to crystalline chile perfection. Lake honed his skills on the uber picky New York City dining scene, learned authenticity from the masters, like Diana Kennedy and Mark Miller, and was named Best New Chef by Food & Winemagazine. But the point is not Lake’s pedigree—it’s his passion.

Why: The Thai-Chinese menu reflects the twin heritage of the Wong family—chef Jason and manager Jordan—and frequent travels in those countries keep the food at J. Wong’s Thai & Chinese Bistro contemporary, combining current trends in Thai and Chinese restaurants with the lush American appetite and bringing us fusion from another point of view.

Why: Utahns are slow to step outside their comfort zone, so the head-spinning speed with which they embraced the Peruvian cuisine introduced by Frederick Perez and his team attests to the Del Mar al Lago’s  excellence. Peru’s long Pacific coast and multicultural history are presented here right on the plate—tiger’s milk, ceviche of all kinds, beef heart and potatoes you’ve never dreamed of.

Why: We are blessed with some great Indian food in Utah, but here in the shadow of the Sri Ganesha Hindu Temple, Lavanya Mahate’s Saffron Valley  presents some of the most varied and little-known dishes from the subcontinent. Drawn not only from the established regional cuisines of India, but from the food carts, street festivals and cafes of its great cities, the dishes at Saffron Valley reflect the richness of raj culture, the spices of the south, and the dharmic intention of ancient vegetarianism. And it’s all good.

Why: Owner Kathie Chadbourne is locally famous for the madcap enthusiasm with which she approaches any project—and there have been many. But her energy and willingness to battle City Hall has paid off in this tiny, eccentrically charming cafe in the Avenues, featuring an idiosyncratic menu—constantly updated by Chadbourne, her pastry chef daughter, Kelly Sue Pugh, and chef Kevin Romans—served in a one-of-a-kind dining room. And now, thanks to community support, a charming patio.

Bowman Brown of Forage and Ali Sabbah of Mazza

Why: This ultimately handmade restaurant has been at the cutting edge of American cuisine from opening day. That’s a hard position to maintain in an industry where novelty makes news, but chef-owner Bowman Brown has kept the (sometimes outrageously) imaginative, experimental cooking at its apex, making Forage something rare: an intellectual challenge. Just its continued existence attests to Forage’s unwavering dedication to its chef’s dream.

Why: The reason is in the bowl. Simplicity is easily degraded into schlock—hence, the student’s sustenance, dried ramen. But the Japanese have a genius for elevating simplicity into art and that’s what Tosh Sekikawa, formerly of Naked Fish, has done with his ramen, a deceptively simple soul-sustaining bowl of broth and noodles.

Why: Utah’s inexplicable appetite for sushi has led to some fishy travesties, but Naked Fish owner Johnny Kwon is determined to keep pure this most elemental dish, and Chef Sunny Tsogbadrakh has the skill to carry it off. So the sustainably sourced protein is so fresh it might still be trembling on your plate.

Why: Takashi Gibo is the undisputed father of fine sushi and Japanese cuisine in Utah. His restaurant established and maintained a standard of excellence and freshness that has never wavered, and the crowds attest to the enduring quality of the food and classic coolness of the dining room. Wisely, Takashi also bows to Western tastes with untraditional signature rolls.

This might be the quintessential Northern Utah restaurant. The antique log cabin radiates mountain hospitality and the beauty and bounty of the Wasatch are apparent on each plate. Chef David Jones is an experienced forager. He, general manager Ian Campbell, owner Margo Provost and banquet manager Faith Scheffler all have a stake in the place, which means visiting diners are treated like personal guests.

Why: Romina Rasmussen’s pastries combine all the nit-picky precision and butter worship that make French pastry one of the culinary wonders of the world. Everything her kitchen turns out is not purely French in origin; but everything does have the sense of disciplined luxury that defines Gallic style.

Why: A restaurant is only as good as its ingredients, and Matt Caputo’s untiring pursuit and procurement of the best products Utah and the world have to offer is evident on menus all over the state. Now with three locations, so regular folks can shop like chefs.